Victorious Zips spike to the top 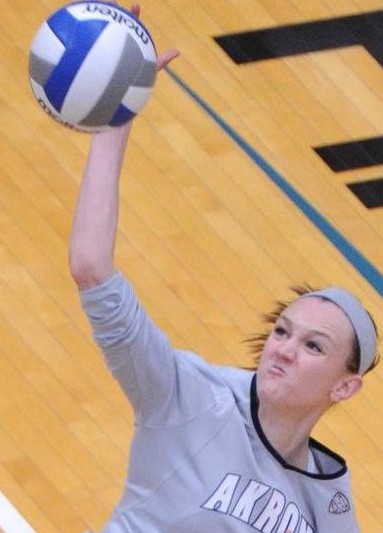 This past weekend, the women’s volleyball team (2-1) competed in the Indiana State Holiday Inn Classic. They played two matches on Friday, Aug. 29th, where they came out victorious versus Chicago State, going 3-1 in the first match of the season. During this match, junior Kelsey Wilson tied her career high in kills with 15. Later on in the day, Akron played Indiana State and fell short 3-0. The Zips played their third match of the weekend on Saturday, Aug. 30th versus North Carolina A&T, taking down the Aggies 3-0.

The team will head out on the road again on Tuesday, Sept. 2nd, where they will travel to Cleveland State before opening at James A. Rhodes Arena this weekend when they host the Akron Invitational, taking on Bryant and Binghamton on Friday, Sept. 5th, before playing Drake and Austin Peavy on Saturday, Sept. 6th.

The CSU Vikings open their home season against the Zips on Tuesday, after returning home from a tournament on the road this past weekend. Akron needs to keep an eye out for Ally Beck, an outside hitter who was named to the All-Tournament Team after her weekend which included 41 digs and 16 kills.

As of Monday, Aug. 1st, Bryant comes into the week at 1-3 after participation in the Hampton Inn-vitational, Binghamton provides a record of 0-3 after their weekend in the LMU Invitational, and Austin Peavy also has a record of 0-3. On another note, Drake won all three games in the Omaha Classic.

The Zips have many games before them between the week and weekend, and they need to keep their determination as they open at home.