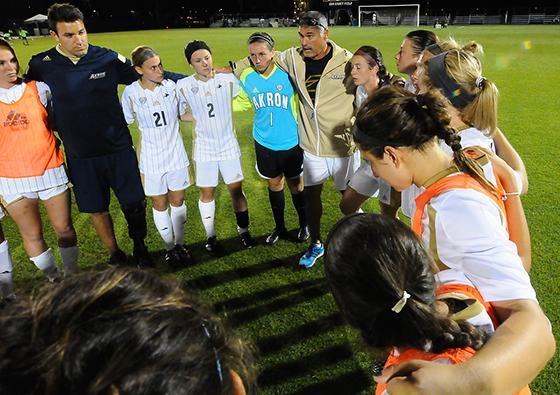 Hoping to rebound after a tough loss against fourth ranked Virginia Tech, the Zips (1-3) lost to Cleveland State (2-3) on Tuesday, Sept. 2 by a score of 3-1.

During the first half of the play, the Vikings’ Chloe Fadenholz scored the first goal within the first 12 minutes of play. Akron would respond back with a score from Sarah Sivic in the 25th minute. Throughout the rest of the half neither team would get another goal, leaving the score at halftime tied 1-1. As the second half started, the Vikings again scored this time by Haleigh Shingary then ended the game with another score from Amanda Sivic.

Zips had six shots, four of which were goals. UA also had more corner kicks than the Vikings, with six to their five. Goalkeeper Alex Luevano-Harden played all 90 minutes and saved six goals from coming into the net.

For the Vikings they had 15 shots, nine of which were on goal. Their goalkeepers Sarah Wood saved three goals from the Akron offense.

The Zips will have their second home game against St. Bonaventure (2-2) on Friday, Sept. 5. Kickoff is scheduled to take place at 7 p.m.