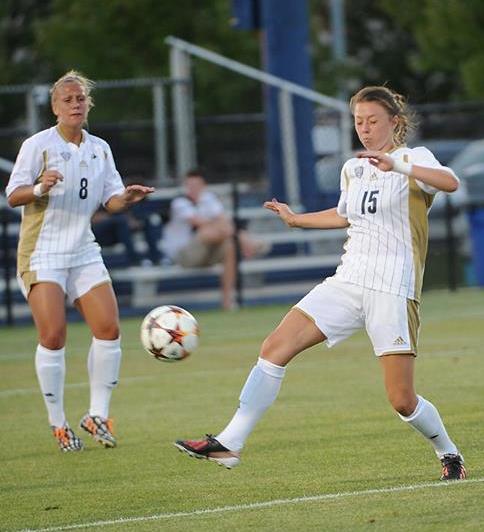 Brooke Carrel (15) running with the ball with Jenna Andersen (8) looking on.

Returning home to a crowd, the Zips (2-3) defeated the Bonnies of St. Bonaventure by a score of 3-1. Their next challenge will come on the road as they head to the East Coast to play against host teams Boston University and Bryant University.

The Zips have gone to senior forward Lani Smith for most of their offense, as she has started each game and leads the team for both shots and shots on goal at 20 and eight, respectfully. Smith has also added one of the six goals that the Zips have scored this season. Sophomore Sarah Sivic is another offensive threat tallying six shots, three of which were on goal and leads UA with goals at two in her five starts.

With 15 saves for the year, the senior goalkeeper Alex Luevano-Harden has done an admirable job in the box while only giving up four scores. Also, sharing the box is junior Klaire Adee who has started in three games and have saved seven goals from scoring.

UA will visit Boston University (4-2) Friday, Sept. 12 as they look to take down their fast offense. The Terriers have multiple players with five or more shots in the season, one of which comes from Ana Cuffia. Cuffia has started every game for BU and has taken seven shots and is tied for the team lead for goals at two with Jenna Fisher. The Terriers’ starting goalkeeper Alyssa Parisi has saved 12 goals from scoring while being scored on four times.

The other road game for the Zips comes from Bryant University (2-4). The Bulldogs have been shutout twice in the season and have lost other games by close margins. Their offense goes through Katy Biagi, a senior who has scored twice and has six shots and Scout Benson, she has the team’s lead in shots at 10 and also has one goal for the season. Kaylan Conrad is the starting goalkeepers with all six starts and has saved 33 shots from crossing the line into the box.