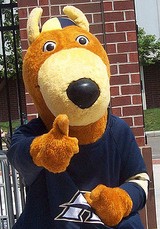 The Capital One Mascot Challenge is in its third week and Zippy is still undefeated at 2-0.

If you forgot or just need a reminder supporters of Zippy can vote daily at capitalonemascots.com. Also, new to this year’s competition fans and supporters can #CAPITALONEZIPPY with all video and pictures of them tailgating for the big game, at the big game, or just around campus showing off their school’s pride.

Continue to back the Zips at the home sporting events and lets keep Zippy undefeated in the challenge.