Students help one of their own 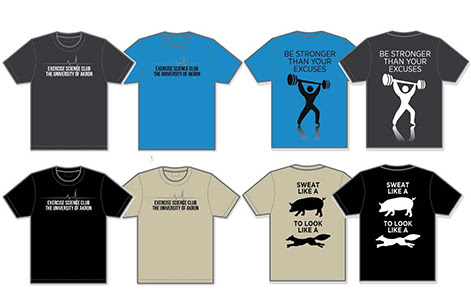 Designs of the t-shirts being sold in the fundraiser.

A student at The University of Akron is hosting a fundraiser to support his mother’s recovery after a serious accident. Lucas Budd, an exercise science major, along with the Exercise Science Club, are selling T-shirts to raise money for medical expenses.

The T-shirts are selling for $10  and proceeds will be donated to the Budd family.

Sharon Budd, a College of Education alumna from The University of Akron, Perry Local Schools educator and surviving breast cancer patient, was seriously injured in an incident on July 10 when a large rock was thrown from a highway overpass and smashed through the windshield of her car.

According to PennLive.com and DailyItem.com, Budd was entered into a medically induced coma following the accident. Since her admission to Geisinger Medical Center, she has undergone multiple surgeries for various injuries.

Four teenagers are accused of throwing the rocks off of the overpass. Their preliminary court hearings were held on Aug. 19.

Donations will assist the family with medical expenses during this difficult period. Exercise Science T-shirts, however, are not the only way to fundraise.

The free online fundraising site YouCaring.com is accepting donations as well. Their goal is $50,000 with $31,563 already raised. The fundraiser has been shared over 6,100 times on Facebook and there are 44 days left to donate on the YouCaring page.

A Booster web campaign has raised $1,600 by selling 145 T-shirts online. The shirts have the hashtag #BuddStrong  printed on the front with “You never know how strong you are…Until being strong is your only choice” on the back.  That fundraiser is now closed.

Kaylee Budd, Sharon Budd’s daughter and sophomore at UA, participated in a motorcycle benefit for her mother on July 18. As said by PennLive, 250 motorists registered for the event and raised $7,670.

Those interested in buying a shirt from the Exercise Science Club should contact Dr. Ronald Otterstetter at [email protected] Payment is accepted in the form of cash or checks.