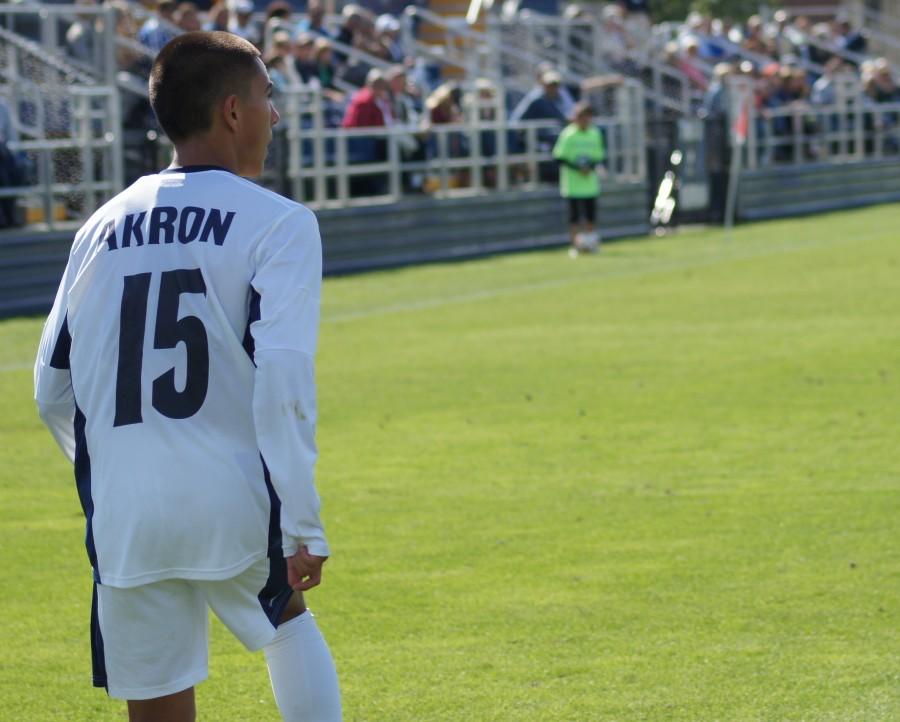 #15 Jesse Garcia-Aguilar looking over the field getting ready to kick the ball into play.

After weeks of on the road matches, the Men’s soccer team returned home to a welcoming crowd and won their host tournament, the Akron Invitational.

The Zips (2-2-1) came into this weekend with a dismal 0-2-1 record and were in need of a win. They needed a competitive game to lift their moral and to give the fans something to look forward to. Thankfully, both were accomplished when they routed both the University of Central Florida and Hartford this weekend during The University of Akron Tournament.

“One thing about this team despite the result they’ve kept their heads up, and you know what we gotten better every game. You got a glimpse of what we are capable of doing. We will keep it going and it’s only going to get better,” Head Coach Jared Embick said to the media after the UCF match.

Friday, Sept. 12, against UCF (1-3-1) the Zips took control and never looked back as they had a crowd of 2,000 plus cheering for a win. The first goal came in the 33rd minute from senior Saad Abdul-Salaam. The second score came from freshman Jesse Garcia-Aguilar as he connected the ball to the back of the net in the 66th minute of play, as the score read 2-0. With minutes left in the match, the Zips gave up a score as the Knights sent the ball over the goal line and past UA’s goalkeeper, Jake Fenlason, ending the scoring of the game as the Zips win their first game of the season in front of the home crowd.

On Sunday, Sept. 14, the Zips took the field again to play an undefeated and physical team of Hartford (3-0-1). The game finished with 36 fouls between the two teams as the Zips win this game as well by a score of 2-0. This would also be the first game that the Zips defense, behind goalkeeper Fenlason, shutout the opposing team. Back on offense, the Zips scored first in the 31st minute as Salaam-Abdul sent the ball past the Hawks keeper David Mackinnon. Getting the better of Mackinnon again in the second half was sophomore Brad Ruhaak as he scored in the 62nd minute.

“We put together wins, something that we wanted to do this weekend. We wanted to come in and win two games at homes and start getting it going,” Embick told the media after the Hartford game. “We were hungry last week. We felt like we let a victory and a tie get away from us and we ended 0-1-1 instead of 1-0-1. I thought you saw the making of a pretty good team.”

The tournament MVPs were both from Akron as Saad Abdul-Salaam won offensive MVP, scoring his first two goals of the season, and Brad Ruhaak, winning defensive MVP.

Returning to Cub Cadet Field this Friday, Sept. 20 at 7:00 p.m., the Zips will host the visiting Tulsa University as they look to continue their winning streak for the season and at home.