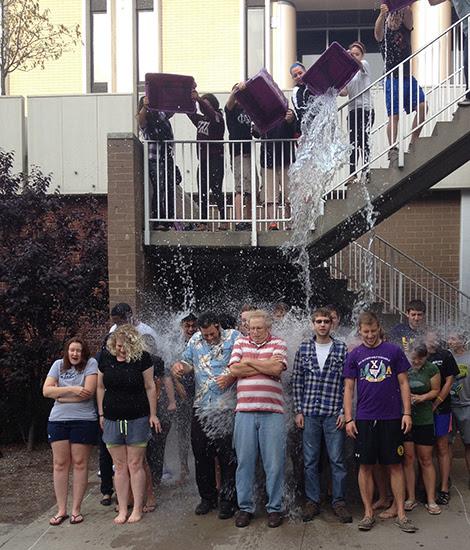 Photo Courtesy of The University of Akron Marketing and Communications Department

Over 100 liters of ice-cold water plummeted onto students and faculty of the Department of Biology who took the ALS Ice-Bucket Challenge.

Assistant Professor of Biology, Jordan M. Renna and students in the Neuroscience in Health and Disease class also donated $730 to raise awareness for ALS.

Renna was nominated to do the challenge, but he thought he could make a bigger splash if more people joined him. He let students vote anonymously to see if they would like to take part in the challenge.

Renna told the students that doing the challenge was “not for a grade and not for extra credit.” The vast majority of the class voted yes. The professor emphasized that the students were the ones who pushed participation in the challenge. He said that it would not have been possible without their generosity. The students raised $365, which the Department of Biology staff matched, resulting in $730.

Renna is proud to say that with their contribution of over $800 has been donated to the ALS Association.

There is no cure for ALS, or amyotrophic lateral sclerosis. It is a progressive neurodegenerative disease that affects nerve cells in the brain and spinal cord. Motor neurons in the body degenerate and when the neurons die resulting in patients losing the ability to control muscle movement. Patients often become paralyzed. The ALS Association appreciates the support which is providing the resources needed to search for a cure.

The Department of Biology’s ALS Ice-Bucket Challenge has been viewed over 500 times on YouTube after only five days. The University of Akron shared the event on their Facebook page, receiving 50 likes thus far.

The Ice Bucket Challenge is a great way to continue the support after millions have participated in the challenge.