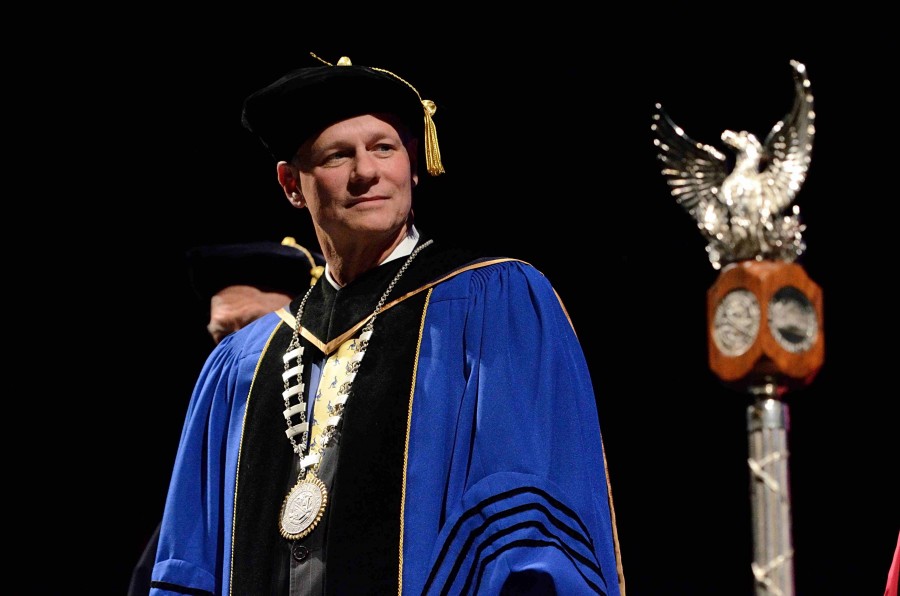 The University of Akron’s President Scott L. Scarborough made history Friday, Sept. 19 being formally inaugurated in a ceremony held in E.J. Thomas Hall.

The ceremony marked the first time in 15 years that the university welcomed a new president. Scarborough replaces Luis Proenza, who had served as president since 1999.

In prepared statements, President Scarborough spoke about the importance of the public university and how they are tied to the American Dream.

“Our duty as a public university is to help make the American Dream possible for as many students as possible,” Scarborough said.

Scarborough, 51, officially became UA’s president on July 1, 2014. Before joining UA, President Scarborough was the Provost and Executive Vice President for Academic Affairs at The University of Toledo.

President Scarborough made sure to point out that even though he was grateful for private universities such as Harvard, UA will strive to be more than Harvard.

President Scarborough’s roots can be traced back to Baytown, Texas where his grandfather successfully ran an independent drug store for 47 years, mirroring the sentiment from his speech of adding to a local economy.

“He became a pillar of his community,” Scarborough said.

In his speech, Scarborough outlined the tale of his grandfather’s life: his father passed away when he was 3; he worked in a refinery and aspired to become a doctor, eventually leaving the refinery and moving his family to a town with a public university.

After enrolling, his grandfather worked several jobs while attending college in order to take care of his family. Ultimately, his grades were not good enough for medical school, but he graduated with a pharmacy degree.

This degree allowed him to become the owner of Scarborough’s Drug Store and the “unofficial mayor” of his hometown, as President Scarborough explained.

All of this was possible because he attended a public university.

The message of Scarborough’s speech was clear: quality public higher education is paramount to the success of those in search of the American Dream. Scarborough will be at UA to help the students at the university succeed in making that dream a reality.

During the ceremony Scarborough was presented with several symbolic gifts from UA.

One gift in particular, presented to him by the UA Alumni Association, was the ceremonial mace. The mace’s most prominent feature was a phoenix rising from its ashes. This is a fitting symbol for UA because of the fire that burned down Buchtel College in 1899.

The phoenix may also be a fitting symbol for the direction which the new president will lead UA.