Around the World party creates unity 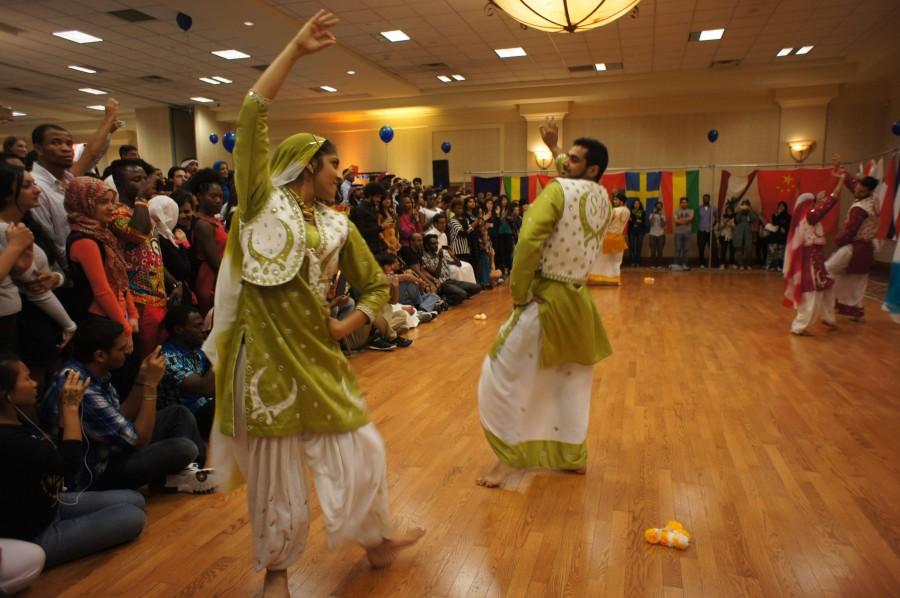 Performers show off their dance to the audience.

Students and staff traveled the globe at the Around the World party in Quaker Square Station. Hosted annually by the Office of International Programs, guests had the opportunity to experience and celebrate different cultures, religions and music represented by UA students, faculty and staff.

Upon entering the party on Friday, Sept. 19, guests were given a “passport” which they could get stamped or have marked with a different language when they visited each country’s table. Each table displayed a country’s various cultural and religious characteristics such as food, dress, language and games. Some countries that were represented include Saudi Arabia, Vietnam, India, Iran, Ghana, Pan-Africa, and many more. Flags from around the world were hung throughout the ballroom in recognition of every country.

To begin the program, demonstrations were given by people representing their country. Many of the groups performed traditional dances. Guests were also encouraged to join in and learn the moves. The Cha-Cha Slide was the first dance, followed by salsa dancing and dances from Saudi Arabia, Africa, Iran and India.

One of these performers was Ping Lu, a graduate student at UA. He played a Bamboo Flute which has a long history in China. The song he performed was called “A Tour of Gusu” and is very famous and traditional in the culture of ancient middle-eastern China.

Lu learned how to play the Bamboo Flute when he was 12 and practiced regularly until he was 21.

“I felt very happy and excited to present that performance which represents the culture of ancient China to the audience from all over the world,” Lu said. “I was a little nervous since I did not play that Bamboo Flute for a long time. But I was confident because I was almost excellent in playing that instrument when I was an undergraduate student in China more than ten years ago.”

After the performances, the lights dimmed and the dance floor was open to all. The DJ played music from around the globe and everyone was free to dance however they wished. People from diverse cultures and backgrounds were on one dance floor together, celebrating each other’s differences.

Senior Jeanine Ali attended the Around the World party this year for the first time.

“I loved the atmosphere of the party. It was great to experience all the different cultures in a fun way,” Ali said. “It was awesome to see all different types of students in one place, just having a fun time. It shows that all cultures can get along.”

The Around the World party was one of the last events to wrap up Diversity Week at UA.

“The Around the World Party is important because it is a great opportunity for all students, including American students, to learn all cultures of different people from different countries and areas all over the world,” said Lu. “It will increase the understanding and friendship between people with different backgrounds and cultures and enhance the compatibility for people all over the world.”

The Around the World party has been going on for approximately 15 years. Graduate Assistant Jennifer Olin-Hitt and her team organized the party.

“My favorite part of the event is the energy in the room when students are sharing their performances to the audience,” said Olin-Hitt.

According to Olin-Hitt, the Office of International Programs organizes this event to let the students from 90 different countries represented at UA share their culture with the larger community.