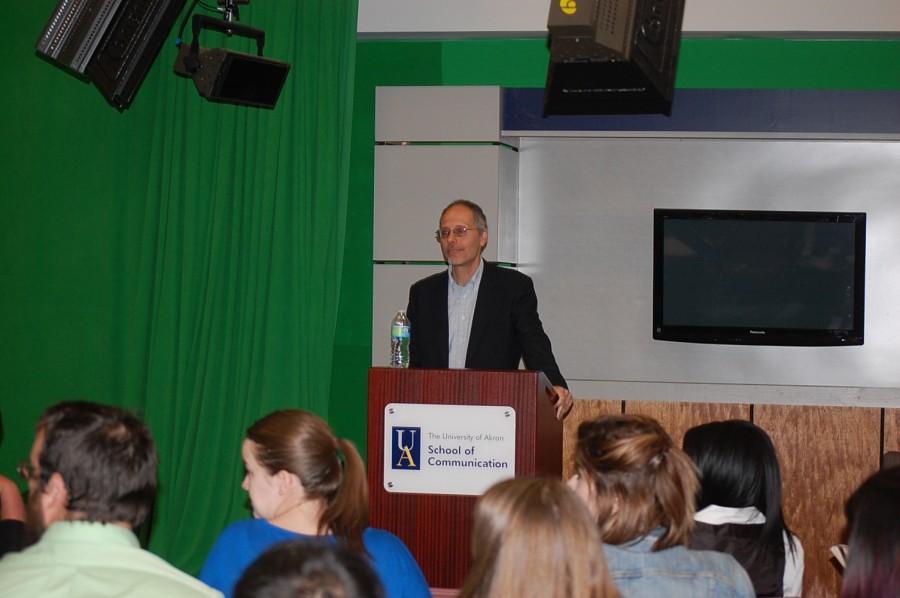 Haridakis as he speaks to students about media.

University of Akron alum Paul Haridakis spoke at the first School of Communication colloquium on Sept. 19th.    A former law student at the university, he encouraged informal discussion among students during his talk.

He stressed the importance of informed research, as opposed to good or bad, in any field of study.  “Education is a base for a lifetime of learning”, he said.

Dr. Haridakis has conducted much research about the media, and how the individual is affected by it. Even though research about social media has been published since the 1920s, he says, new environments are always changing the ways we research.

One of his studies he talked about involved how media violence on television affected audience aggression.  He studied people’s motives for watching violent programs, and discovered that it was the individual’s background that determined how aggressive they became after watching the violent content, not the content itself.  When a person views violent content alone or for pure entertainment, they are more aggressive.  He also found that men who watch violence on television were more aggressive than women.  The data was measured using a self-report scale.

In 2008, he did a study of political cynicism before and during the presidential election.  The polarization of parties, bantering, and negative advertisements all contributed to the audience’s cynicism.  However, the individual’s background was important as well.  When political content viewers used social networks to get information, they were less cynical.  Elaboration, or thinking about political content, caused a person to be significantly more cynical.

Another study Haridakis talked about was about what the individual’s blogging habits said about the individual.  Each blogging type was assigned by a personality, that personality being the type of person you are outside the virtual world.  Personality types included Self-centric, Utilitarian, Planning, Sharing, Protective, and Unworried.

The last study the alum talked about was the level of Youtube activity based on the person’s age, gender, social activity, interpersonal interactions, and motives.  He found that the more control a person has over themselves, the more likely they are to share Youtube videos.  Also, when a person watches videos with another person, they watch more videos in general and are more likely to share them.

Haridakis said, “Doors are wide open for advancement in communication studies.  The field is always changing”.  When The Buchtelite asked Haridakis why people depend on the media so much he answered, “Dependence is natural.  We need it to satisfy basic needs and desires.  Desires are thwarted by psychological unrest, and information helps orient our environment for us”.  Haridakis’ talk was very informative, and he involved the audience so that they were completely engaged in what he was saying.  He passed out final data charts from his research for the audience to reference.

He ended with a profound statement: “we really are in the middle of a communication revolution”.