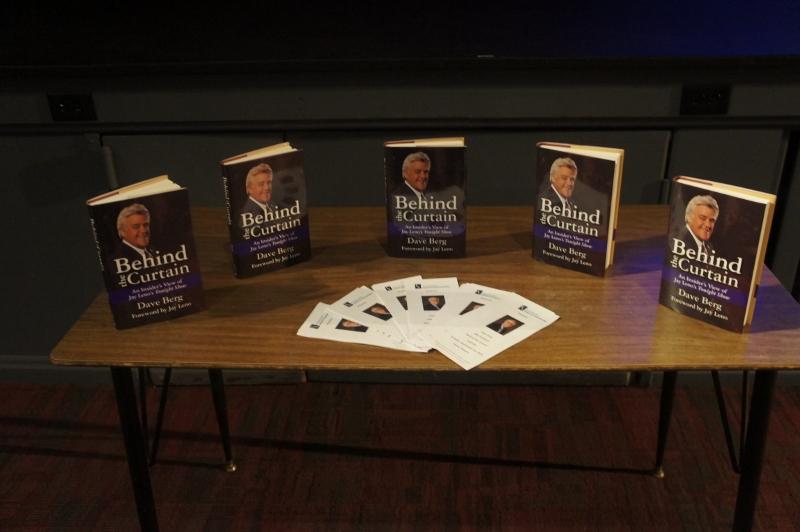 Everyone has heard of The Tonight Show and its iconic host, Jay Leno. Most people do not contemplate what is happening behind the camera when watching on television.

Dave Berg was a co-producer for NBC’s The Tonight Show for 18 years. Berg came to UA to talk about the process of producing a late night television show. He gave advice for students wanting to join the entertainment industry.

“The Tonight Show was like a business. It was a show and a business,” Berg said.

Berg joined the entertainment industry after working in news and became an asset to the show. He was able to bring in not only entertainers, but also presidents and politicians.

After being fired from NBC, Berg explained, “you have to take a lemon and make it into lemonade. I was fired and then down the hall was Jay [Leno]. I didn’t want to talk to him, but I knew I could not go home and face my wife without doing so.”

By taking a chance, Berg landed himself a job as co-producer of The Tonight Show with Jay Leno and The Jay Leno Show.

He booked Chris Matthews 29 times for the show. Matthews is an American political commentator and news anchor for his talk show Hardball with Chris Matthews. He explained he would get the best guest when someone had something to promote, like a book.

Berg explained the process of booking guests for the show. The process is more complex than one might think. Berg told the audience about his favorite guests that took years to book. His all time favorite was John F. Kennedy Jr. The booking took Berg over six years to accomplish. He told the audience that JFK Jr. did not feel he was famous enough to be a guest star on the show. When Berg finally convinced him, the only night he could appear was the same night as the last episode of Seinfeld.

This meant that JFK Jr. would have to appear after Jerry Seinfeld. JFK Jr. told Berg that he was intimidated by appearing alongside Jerry Seinfeld, but Berg talked him into it. He explained how JFK Jr. and Jerry Seinfeld had chemistry on stage and how he was a wonderful guest to have.

“He was the most charming guest ever,” Berg said.

While speaking to the audience about his experiences, Berg said that he believes guests on shows should be both true and funny as opposed to other producers, who only considered the entertainment aspect.

President Obama was a recurring guest on Jay’s show. Once as an author when he was still an Illinois senator, a second time as a presidential candidate and the third was as the President of the United States.

“I had formed relationships with Obama’s staff,” he explained.

Berg explained that Obama’s appearances on The Tonight Show was the first time a president had appeared on a nighttime television show.

His manager and wife, Mary Berg, accompanied Berg during his presentation and press conference which was open to the audience to engage and ask questions. The event was free to the public, however, it consisted mainly of university faculty and students with interest in the media world.

Mrs. Berg kept telling students at the press conference, “I can’t tell you how many times he has heard the word ‘no.’” Berg agreed with his wife and explained that this is an industry where you have to have thick skin in order to succeed.

The best advice Mr. Berg said he could give was to be persistent, be aggressive and don’t be discouraged by the word ‘no’ because you will hear it a lot. Berg also told the audience when starting your career to start local and stick with social media because this is a skill older generations have yet to learn and the younger generation already possess.

“You go where you can when one thing leads to another,” Mr. Berg said.

Berg explained there is now a difference in Hollywood due to the show moving to New York City. Speaking on this subject during the lecture brought tears to Berg’s eyes. He explained that when the show was in Los Angeles the guests would go from the show to their movie premier. This is causing movie premiers to relocate from Los Angeles to New York City . It’s taking away from what Hollywood is known for.

Berg started out as a farm reporter in Wisconsin before he advanced in his career. He has written for NBC News, USA Today, The Huffington Post, National Review, Christianity Today, The Washington Times Crisis Magazine, The Daily Caller and Reader’s Digest. He was producer of The O’Reilly Factor and the Los Angeles bureau chief for NBC.

After the book tour promoting Behind the Curtain: An Inside Look to Jay Leno’s Tonight Show, Berg will take a position in LA as a columnist for the Orange County Register.