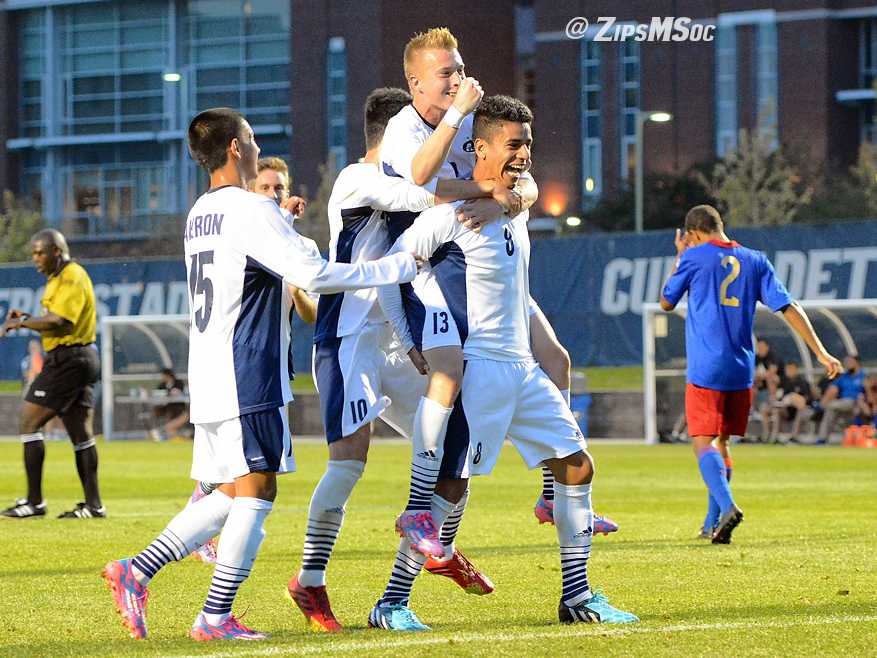 Men's soccer squad after a goal.

Wednesday, Sept. 24 the Zips continued their winning streak to four matches as they beat the Buckeyes 3-1.

“We’re finally coming together as a team. We learned a lot during the first couple of games and now we are feeling confident.” Sean Sepe told the media after the game.

The Zips (4-2-1) not wanting to let the traveling fans or themselves down as the team took control of the match from the very first kick, gaining possession and moving the ball down the field to attack the goalpost. Having their first goal opportunity in the 10th minute as Sepe assisted the ball to Sam Gainford who tapped it in but was quickly covered by the OSU goalkeeper, Alex Ivanov.

Unfortunately, for Ivanov the Zips would be back again minutes later this time sending the ball through the net for the match’s first goal off the feet of Sam Gainford after shaking off his defender in the 12th minute of play.

“We found the right balance between attack and defense with the whole team.” Head coach Jared Embick said about the squad’s lineup, adding: “It all ties together; when we attack well, we defend well, and we defend well be attacking at a high level.”

The Buckeyes (2-2-3) would respond to the Zips offensive attack and score a tying goal in the 17th minute as a mistake by one of Akron’s defenders left the net open as Danny Jensen took his chance and shot the ball beyond the UA goalie, Jake Fenlason.

The rest of the half included the Zips keeping the momentum by taking quality shots and keeping the Buckeyes’ attack at bay. However, in the 35th minute the Zips would add to the score again as freshman Stuart Holthusen passed the ball up field to a waiting Sepe who then got pass his defender and took a shot that was just out of reach for OSU’s goalie. Making the halftime score 2-1 in favor of the visiting Zips.

The last goal of the match went again to the visiting squad as once again Holthusen passes the ball up to Gainford who lifted the ball so Adam Najem could head the ball in for the goal during the 76th minute, giving us the final score of 3-1.

“As a team the Zips had six corner kicks and 19 shots, 12 of them being shots on goals. Fenlason had four saves and Holthusen recorded a rare double assist in their match against OSU. During this four game winning streak, Akron has out-scored their opponents 10-2, 6-1 in the last two games: I think the last two games we wanted to improve our performance and play Akron soccer. We know we can win if we play the way we are capable of.” Embick said to the media.

The Zips will take the rest of the week off before traveling down to North Carolina Tuesday, Sept. 30th to wrap up the month against Wake Forest.