Religious protestors cause stir on campus 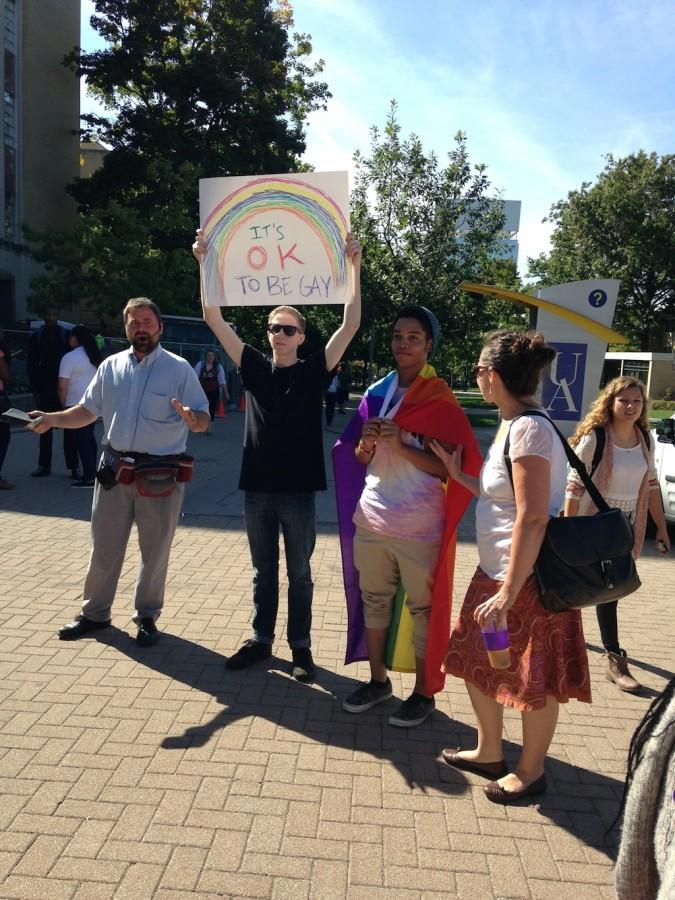 The University of Akron was rife with contention on Thursday, Sept. 25 as five spokespersons from an independent Christian church took up positions outside of Bierce Library.

The church is based in Kentucky, though the men have been making rounds to several college campuses in the Summit area. This was their second time visiting UA during the 2014 fall semester, the first being just two weeks ago.

Church representative, who would only identify himself as Mr. Prowant, said that their mission is to “preach the gospel.”

“We are here to show and share God’s love. It’s not just an acceptance—but a true love. To those who reject Him, God’s wrath will bind them until the judgment comes,” said Prowant.

The representatives brought posters that provoked ample debate among students.

One sign, which was particularly offensive for females, read “God’s Role for Women,” listing requirements like “submission,” “quietness,” “beauty,” and “modesty.”

“It’s okay to be gay, but it’s not okay to be homosexual” was a pun used by one of the men on the microphone. Not long after, students began arriving with their own pro-gay posters and LGBTU flags.

Bronson Loera, a first-year psychology student, and Chris Skove, a senior exercise science major, remained at the affair for over an hour to speak with the advocates.

“I got the feeling that they came out here and protested militantly against homosexuals and the people who they deem as sinners, but they don’t want people to hate them. They are doing what they think is right, and the students are arguing for what they think is right, but I don’t know that they [the students] are arguing in a mature way,” said Loera.

Debating back and forth between students and the Christ advocates proceeded to push each others. “It’s a blessing to be out here and share my faith. Some come to encourage, some come to argue and some come just to ask questions,” Prowant said. The advocates stayed the whole day, falling under constant scrutiny of students who disagreed with their firm convictions.

“I don’t know if it’s disrespect, but [students] definitely don’t want to hear something they don’t necessarily believe. The disagreements are causing a ruckus,” said Skove.

Two police officers came to the scene, but quickly left when they saw nothing wrong.

Whether agreeing with their positions or not, students generally found the advocates were unnecessary.