And what's the deal with homecoming in college? 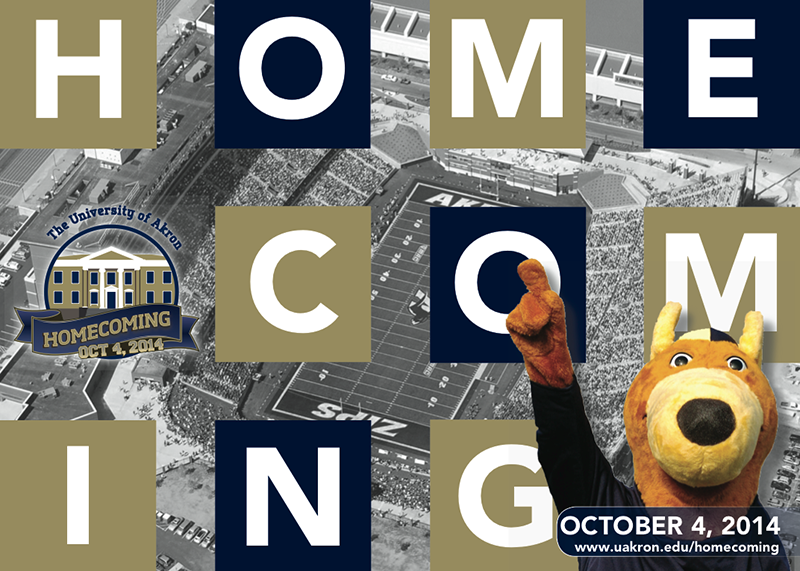 It’s homecoming at The University of Akron, and the five days from Tuesday, Sept. 30 to Saturday, Oct. 4 brings UA students a promise to bring plenty of fun festivities.

David Vale, Assistant Director of Campus Programs at UA, says that homecoming is a time to “welcome back alumni and celebrate the successes of the university [and] showcase the spirit and pride we have in being ‘Forever a Zip.’”

Homecoming’s pinnacle student event, the formal dance, will be held on Friday night from 8 a.m. to 12 p.m. in the Student Union Grand Ballroom. During the dance, the king and queen of the Homecoming Royalty will be announced.

Voting for king and queen began on Monday, Sept. 8 and closed at midnight on Monday, Sept. 22. Candidates, eight women and five men, had to give presentations and interview with the Homecoming Judging Committee.

The Royalty consists of exemplary upperclassmen, summating all that The University of Akron is about.

“Though [the candidates] are extremely diverse, the students tend to excel academically and have been involved in co-curricular activities,” Vale said. “The significance of having a Homecoming Royalty is to recognize student leaders who have contributed to the betterment of the university.”

The Committee’s decisions account for 75 percent of each candidate’s score; student votes count for the other 25 percent. The gentleman and lady with the highest scores will be crowned.

For homecoming’s next major event, UA’s football team takes on the Eastern Michigan Eagles at 2 p.m. on Saturday, Oct. 4. The Homecoming Royalty will be announced at halftime.

According to UA’s website, alumni are encouraged to arrive early to this event “to walk the brick pathways from your days here.”

They can buy a game ticket and a food and drink voucher for only $10.

The week’s events, including a concert by rapper Sammy Adams, men’s soccer match, and sidewalk chalk decorating, can all be viewed on UA’s Student Life website under the Homecoming tab.

Homecoming is typically thought of as a tradition reserved for high school, a practice outdated for students of higher education. Each has significance unique to its school.

College students can take pride knowing that they were the pioneers of homecoming, though ambiguity shrouds which school was first. Active.com states that Harvard, Yale, Baylor, Illinois and Missouri all held a planned event around 1910 with the same idea—establishing a tradition of welcoming back alumni to their alma mater.

This called for a grandiose event of celebration, reunion, and festivity. What with sport being the essence of American culture, what better way to unify students of past and present than a good game of American football?

Thus, the zenith of homecoming was meant to be a football game or other major sporting event. Along with parades, rallies and speeches, the formal dance was tacked on as another way to celebrate.

In its near 100-year evolution, homecoming has developed differently for each level of education. The contrast between high school and college homecoming lies not in the gravity of the event, but in the seriousness of the preparations.

College homecoming tends to focus more on the sporting event than the activities surrounding it, tailgating for the big game being common. Priority is placed on the returning alumni—the dance (or other event, such as a concert or parade) being a relaxed excursion where nothing is expected but a good time.

David Vale, UA’s assistant director of campus programs, said, “It is a chance for members of the educational institution to return, to celebrate together, and to highlight the current individuals who represent the institution in a positive manner.”

Homecoming has always been, and will always be, just this no matter which school.