Zips tame the Pitt Panthers in the Panther’s Pit 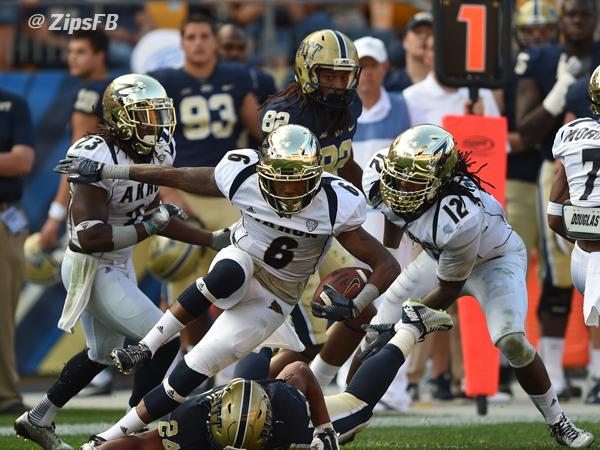 Akron moving around the Panther's defense.

Akron traveled to Pittsburgh and defeated the panthers 21-10.

UA’s rush defense held the number one rusher in the NCAA, Pitt’s James Conner, under 100 yards.

The Zips (2-2) offense had 35 passing attempts to 36 rushing attempts. The workhorse for the offense was Connor Hundley. In 19 attempts, Hundley ran for 148 yards with an average of 7.8 yards per carry. Defensive lineman Cody Grice rushed for two touchdowns giving UA the lead that they never relinquished.

Kyle Pohl had another solid game behind the center going 193 yards on 15 completions and a touchdown that went to sophomore WR Mykel Traylor Bennett who averaged 24 yards per carry on three catches. Zach D’Orazio caught six passes for 59 yards.

The Zips had 382 yards 20 first downs converted 44 percent of their 3rd down conversions, while also having the ball for 26 minutes in the game.

The Zips stayed strong on the defensive side stopping Conner for 92 yards on 25 attempts and a long of 12 yards. The defense was out on the field for 34 minutes snf showed signs of fatigue but did their job throughout the game.

Akron forced fumbles on the Panther’s offence three times while recovering once and grabbing an interception from Chad Voytic.

The defense was led by Jatavis Brown, recently named the Mid-American Conference Defensive Player of the Week for East Division. He had 11 tackles and a game tying sack, along with Se’Von Pittman and Nmesoma Okafor, who both had four tackles in the game. Bre’ Ford had 10 tackles and a force fumble that Bryce cheek recovered.

Some important notes to take away from this game is that the Zips were the first team to score on the Pitt defense in the 1st half of the game and the UA is the first Ohio college team to beat Pittsburgh team in PA since OSU in the 2006 season. Also, with this win the Zips won its first game over a power five conference since the 2008 season when they defeated Syracuse 42-28, also away.

Saturday, Oct. 4 the Zips will head back home for their homecoming battle against the Eagles of eastern Michigan University, kick off begins at 2 p.m. and the tailgate for students begin at 11 p.m. behind Spicer residence hall.