Streaking through the season 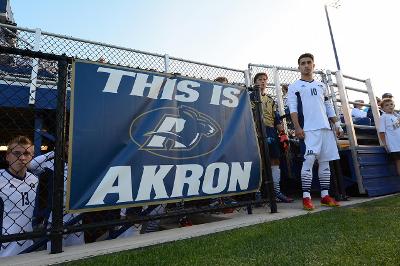 Akron heading out to the field to play a game.

After dominating Big Ten Rival, Ohio State (2-2-3) with a commanding 3-1 defeat, Akron (4-2-1) will head on the road to North Carolina to visit Wake Forest on Tuesday, Sept. 30 and then return home to host UAB at FirstEnergy Stadium-Cub Cadet Field Saturday Oct. 4 at 6PM.

The Blazers have found their niche after losing two straight and show no signs of slowing down heading into Akron to take down the Zips, who are riding a four game winning streak.

The last time the Zips and Deacons faced each other was in 2010, the year the Zips won the National Championship. Akron defeated Wake Forest in North Carolina 2-0.

The Zips and Blazers last faced each other in Akron back in 2007. The Zips went on to defeat the Blazers 1-0.

Michael Gamble has been a dominant player for the Deacon’s this season, recording six goals and assists in eight matches. Gamble also has 23 shots on goal for the season as well and made four of his six goals against VMI in their 7-0 victory.

Alex Clay has started the season blazing hot, as he has scored four goals this season along with his four assists. Clay has shot 16 shots, 12 of which were on goal, making him one of the best attackers. Clay was Co-Captain last season and earned the Conference USA Golden Boot Award along with being named to the All-Conference USA Second Team and NSCAA/Continental Tire NCAA DI Men’s All-Midwest Region Second Team last season.

Junior Sean Sepe has shown a lot of determination in the last few matches as Sepe has continued to push this younger squad to victory the last four matches. Sepe scored the go-ahead goal against Ohio State, giving Akron the 2-1 in the eventual 3-1 victory. Sepe transferred from St. Johns, who earned All-Big East Second team honors last season.

Freshman Forward, Sam Gainford had a breakout game against Ohio State last week. Gainford scored his first goal off a Sepe assist which gave Akron the 1-0 in the match. Gainford has slowly been coming to life as the season merges on. Gainford also has 2 assists on the season as well.

March to the Match begins right after the UA vs. EMU football game on vine street at 5 p.m.