Splitting the weekend at home 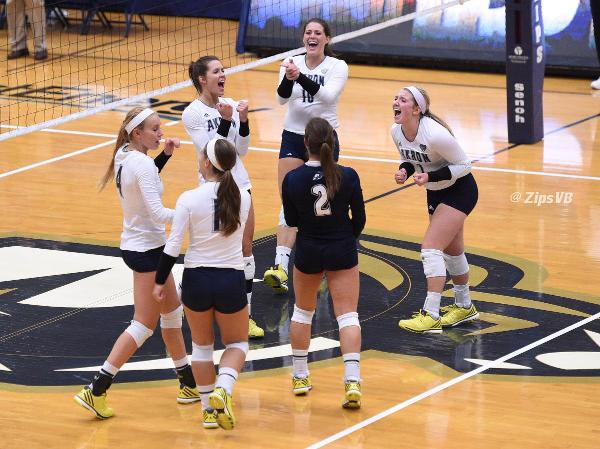 On Friday, Sept. 26 and Saturday, Sept. 27, the Zips (7-10) hosted both Miami (Ohio) (8-5) and Bowling Green State University (3-11) at James A. Rhodes Arena. In the match against Miami, the Redhawks beat Akron 3 sets to 1. Against BGSU, the Zips came up on top, beating the Falcons 3 sets to 0 to accomplish their first MAC win of the year.

Miami came out winning the first set on Friday, but Akron fought back to get the second set 25-20.

In the next two sets, Miami came out victorious and took home their first MAC victory of the season. For the Zips, Karley Kusan grabbed her third double-double of the season while Mary Delich, named this week’s Student Athlete of the Week, hit .419 during the match. Along with Kusan, Aubrey Kozer, Brenna Micic and Callie Mack had double digit digs which combined for forty-eight of the sixty-one total.

In the win against BGSU, now 0-2 in MAC competitions, Akron snapped their five match losing streak.

The first set was evenly matched as both teams had a chance to come out victorious, but Akron stayed calm when Bowling Green went for set point, and eventually went on to get three points to win the set 26-24. The second and third sets followed the same mentality, but again Akron was able to break loose and win them 26-24 and 25-22. Akron has not beat the Falcons since 2010, so this proved as a pivotal match because not only did the Zips break that streak, but they now stand at .500 in MAC competitions.

Akron travels the short distance to Kent State on Friday, Oct. 3 when they take on Kent State for the PNC Wagon Wheel Challenge!