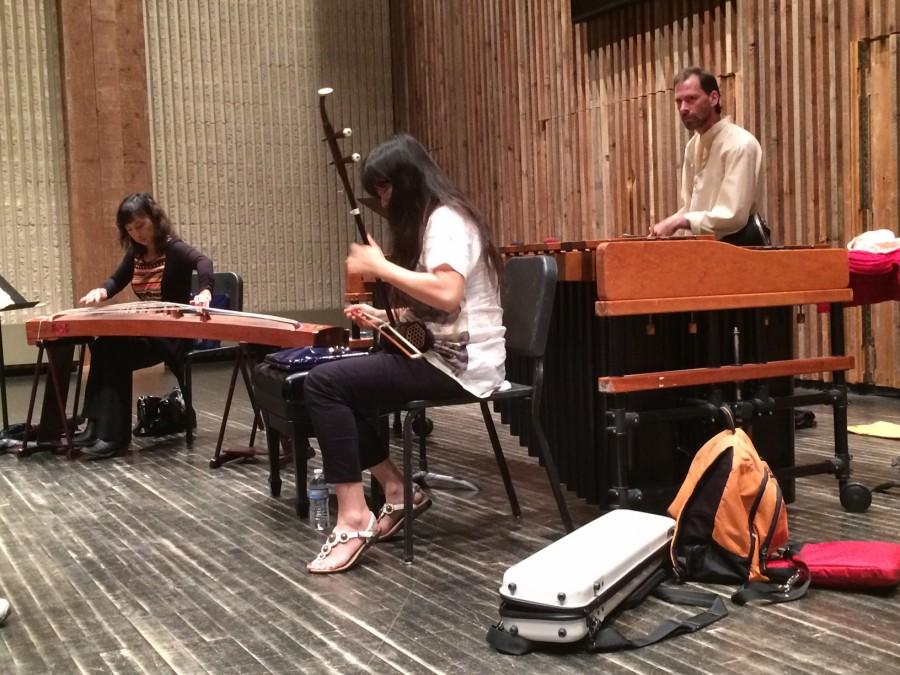 After their performance on Sunday, Sept. 28 at Guzzetta’s Recital Hall, the Orchid Ensemble gave a music workshop as a part of China Week.

The workshop was held from 10 a.m. to 12 p.m. and had an intimate setting as they let audience members sit on the stage with them as they played and held discussions about their backgrounds.

The Orchid Ensemble consists of three members: Lan Tung, Yu-Chen Wang from Taiwan, and Jonathan Bernard. They bring together traditional instruments blended together into a very intercultural sound that you wouldn’t hear from a traditional ensemble.

Tung plays the Chinese violin, or the erhu, which consists of a stick-like neck with two strings stretched across it and a base with snakeskin stretched across it. The snakeskin on the base gives the erhu the amplification needed in a concert hall. Tung has traveled to India to study music and has played across the world in Vietnam and Japan with Orchid Ensemble.

Wang played a much larger instrument called the zheng, which resembles a table-like guitar. The zheng has 21 strings and 21 bridges to adjust the tune.

In Orchid Ensemble, Bernard plays all of the different percussion instruments.

“Some of the most beautiful instruments in the percussion section come from Asia,” Bernard said.

Bernard has studied in Egypt, India and many other parts of Asia to build a vast array of knowledge among instruments and their histories. Along with his travels to study, he and the rest of the ensemble have traveled to many jazz, children’s, chamber, and folk music festivals to highlight their unique sound.

Throughout the workshop, students could ask questions about the key they were playing in or how they developed a certain song. The entire experience was an interactive event as everyone was involved in the discussions that were conducted. One student even brought his own erhu to the event to get some insight from Tung own techniques.

Orchid Ensemble’s sound is just as unique as all of the instruments they can play, bringing a very lively sound and energy to the stage with their performances.