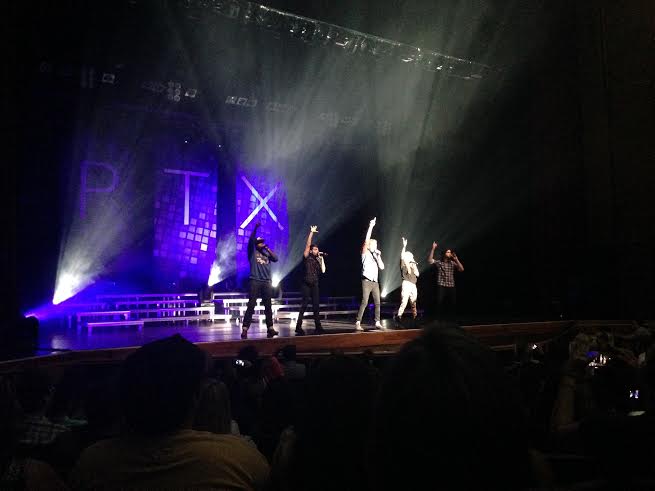 All of the members of Pentatonix have special talents that harmonize when coming together. Scott Hoying has a voice that has a hint of soul and R&B. Kirstie Maldonado brings a soft but eclectic voice. Mitch Grassi is the youngest out of all the members and has a pitch that would make you think otherwise. He’s capable of vocal ranges that most people wouldn’t think a male could hit.

As for Avi Kaplan and “K.O.,” the beatboxer, their voices are used for the music-like sound in the songs. Kaplan has a deep voice that will send chills down your spine while “K.O.” beatboxes help bring every song together perfectly.

Pentatonix won season three of NBC’s The Sing Off and have been touring ever since. During the concert, Pentatonix sang a wide variety of songs from a mash-up of Beyoncé songs to one of their originals, “Natural Disaster.” Another one of their covers was also Lorde’s “Royals.”

During the concert, Pentatonix made sure the crowd was fully involved by asking them to sing along, clap and stand up. Fan of Pentatonix, Abigail Fransicks said, “Definitely one of the best performances I’ve ever been to. They were amazing, I love them.”

Pentatonix also brought up a girl to the stage who was celebrating her birthday and sang Marvin Gaye’s “Let’s Get It On.”

The lights were synchronized with the beat of the music. After the last song, the group left the stage, but the fans didn’t. There was a standing ovation and Pentatonix came back out and rocked the crowd once again by singing Fun’s “We Are Young,” which the whole audience participated in.

Student Destiny Aldridge said, “The ending was my favorite. I love how everyone stood up and started clapping, the lights dimmed and Pentatonix came back out and started singing. That was so cool because they just knew we wanted to hear more.”

This performance was definitely one to see because of the amazing voices of Pentatonix and because they weren’t afraid to interact with their fans.