MACtion starts on the gridiron 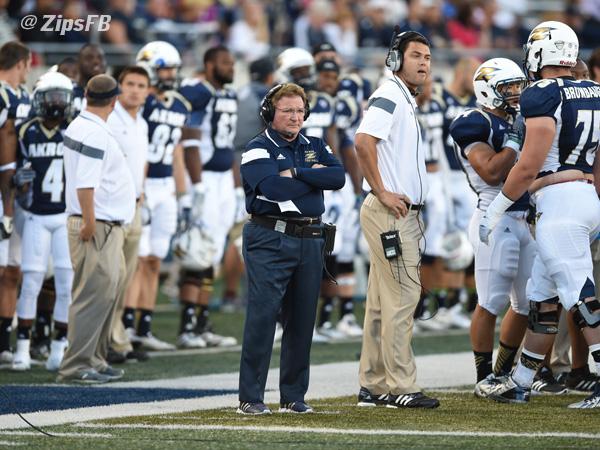 Terry Bowden and his football team on the side line.

Saturday, Oct. 4, the Zips will look to start off MACtion on a high note as they play visiting Eastern Michigan University.

The Zips (2-2) are coming home from one of their biggest wins in history after beating a Pittsburgh team on the road in Heinz Field 21-10.

“We know what [our identity] has been and we know what we want it to become. We have our goals and objectives and it all continues against Eastern Michigan,” head coach Terry Bowden said to the media. “If we play well, we can play against anybody.”

Akron had a balanced game last week against one of the best defenses in the nation and will look for the same balance against Eastern Michigan. The starting QB, Kyle Pohl, has played well throughout the season, throwing for 860 yards on 79 competitions. Pohl threw a 52 yard touchdown pass against Pitt and now has a total of five for the year. Connor Hundley started against Pitt and out-shined opposition running back James Conner with 148 yards on 19 carries.

The Zips have a few options in their receiving game such as junior Zach D’Orazio, who averages five catches per game and has 226 yards in the season and Mykel Traylor-Bennett, who has four touchdowns and 216 yards in four games. L.T. Smith is another target for Pohl with 139 yards and averages 34 yards per catch.

The Zips are No. 1 in the MAC in scoring defense, giving up 19.8 points per game while also being second in turnover margin. UA’s defense is also ranked third in the conference which will help against a struggling EMU offense.

Four of their powerful linebackers are ranked in the top five in tackles: Jatavis Brown (30), C.J. Mizell (22), Dylan Evans (18) and Justin March (17). The Zips also have Nmesoma Okafor who leads the team in sacks with 2.5 this season and ranked is seventh in tackles with 15. UA’s defensive back has done well in the last few games. Devonte Morgan has 18 tackles and Bre’ Ford has one of the four interceptions a forced fumble and 14 tackles in the season.

The Eagles of EMU will look to one of their three QBs (Rob Bolden, Brogan Roback, and Reginald Bell Jr.) to start the game this week against the Zips. However, as a unit they have thrown for 331 yards scoring two touchdowns and thrown two interceptions to the opposing team. Between the three of them they have completed 49 out of 104 passes for just over 47 percent and have an average of 3.18 yards per pass. Rushing the ball, EMU has Bronson Hill, Darius Jackson and Ryan Brumfield combined have close to 400 yards and three touchdowns for the season.

Their defensive leaders are: Great Ibe, who leads the Eagles with 43 tackles, and Pat O’Connor, who is fourth in tackles with 22 but leads the team in sacks (3.5) and tackles for loss (6). As a team, the defense has hit the opposing QB 17 times and have come up with four turnovers in their four games.

Come out and support the Zips in this homecoming battle between the Zips and the Eagles this Saturday at 2:00 p.m.