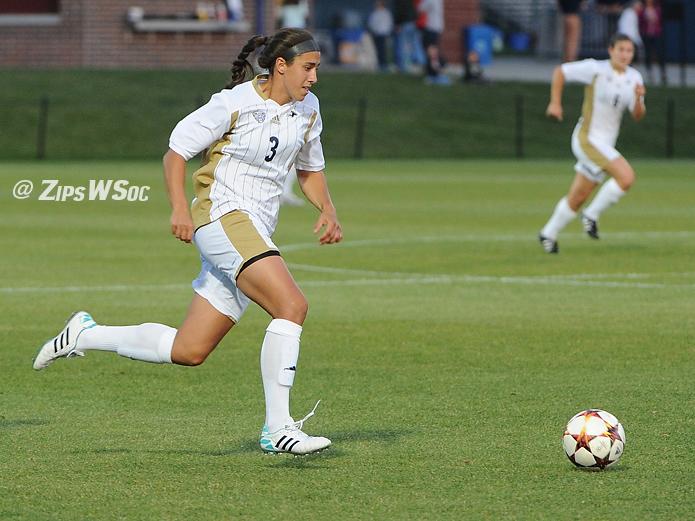 No. 3 Lani Smith attacking the ball towards the goalie of Ohio University.

On Friday, Oct. 2, the Zips will play their third MAC game of the season, hosting the Eagles from Eastern Michigan University. The Zips (4-5-1) will look to get their first win in conference play after losing two matches on the road to Ohio and Kent State, where they were outscored 6-1.

The Zips have shot the ball 87 times with 44 goals, and eight assists. Akron’s top player is Loreana Lonigro with four assists. Lonigro has played in nine of the ten games this season and has been attacking well. Karina Atkinson, Amy Dean, Sarah Sivic and Lani Smith each two goals this season. Smith leads the Zips in shots (35) and shots on goal (16), something that the Eagles should be mindful of during the match. Klaire Adee, goalkeeper, has 33 saves and a shutout match.

Eastern Michigan University (6-2) has wins against Indiana, Oregon State and Miami. EMU’s two defeats came from Michigan State and No.16 Texas Tech earlier in the season. The Eagles are also on a four game winning streak thanks to star player Angela Vultaggio, who has team highs in goals (5), shots (24) and shots on goal (13).

Their leading assisters are Chelsie Oddan and Madison Hirsch who both have three assists and five shots. The Eagles have Megan McCabe as their goalie. McCabe has been scored on six times through nine games and have saved a total of 41 shots from beings scored. She also leads the MAC conference with four shutouts.

Start homecoming weekend out right by cheering on your Zips to another victory at Cub Cadet Field, kickoff starts at 7:00 p.m.