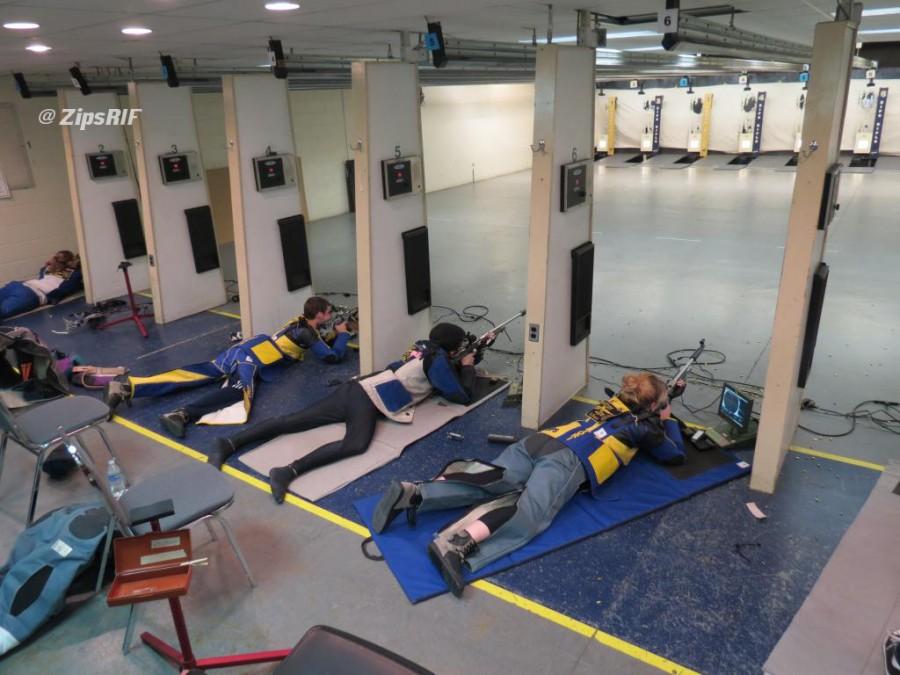 It may have rained all the way to Annapolis, MD. but the spirit of the Zips Rifle Team was high and dry as they went head-to-head with the Midshipmen from the U.S. Naval Academy.

Akron finished on top, in their first match as the newest member of The Great American Rifle Conference (GARC), with Akron taking the final score of 4615 to Navy’s 4592. The air rifle team score of 2333 is two points ahead of a long-standing record from 2011, which was also set at Navy. “Every member of the team has been working extremely hard to prepare for our opening match,” said head coach Newt Engle, “with the implementation of new training plans, extended hours, inner squad competitions and more, this year’s team is definitely on the move.”

Junior Matt Chezem had a great weekend in Annapolis where he broke several records. The first record was in the event of long standing, the record set in 2012 of 200-17 where Chezem posted a 200-19. The second came from the smallbore event where Chezem shot for 584 beating the record of 581. The third record Chezem broke was in the air rifle event, where he scored 595 points out of 600 points, the old record being 590 set back in 2009 in the NCAA championship.

Note anything over 590 is an Olympic level performance. Due to his performance, Chezem was invited to represent America in the Championship of the Americans held later this month in Mexico.

Not to be overshadowed by their teammate, other Zips made significant contributions to this record setting win. Senior John Hupp took second place overall in smallbore by getting 576 out of the possible 600 points. In air rifle, another Senior, Liz Berlin finished second overall breaking a three-way tie with Navy’s Brandon Thompson and Akron’s sophomore Zachary Strohl who all fired 583. This is a new career high for Berlin.

On Saturday, Oct. 11, the traveling rifle team will go to The University of Kentucky while the home team will compete in the John Jay College of NY.