Shining through the clouds 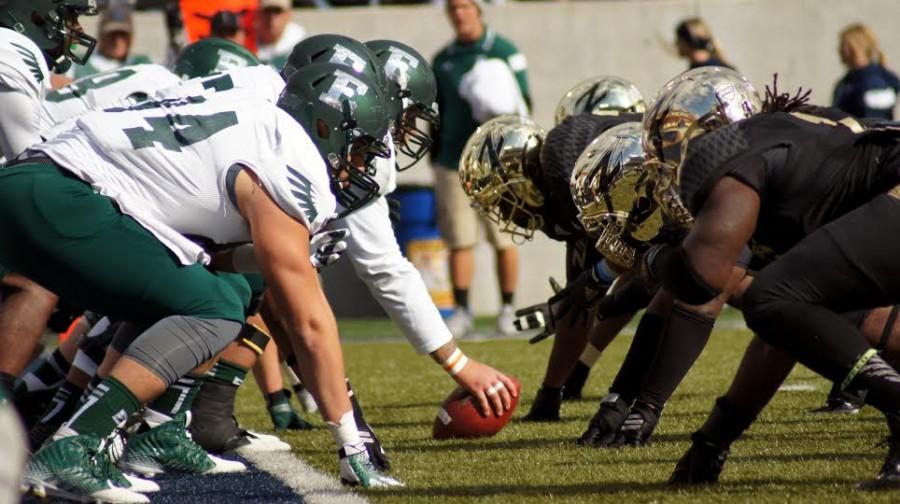 The UA's defensive line ready to attack the EMU's offense.

The Zips win their first MAC opener since the 2007 season, this time against the Eagles of Eastern Michigan University (1-4).

The final score was 31-6 as Akron takes a 3-2 record going into the sixth week of the season.

Down 6-0 in the first quarter, the Zips took the ball down the field and took the lead on a five-yard run by junior QB Kyle Pohl. From that point the Zips took control and the Eagles never had a chance of winning the game.
Stats of the game:

Akron controlled the ball for 34 minutes, where they picked up 27 first downs and a total of 552 yards.

Pohl threw for two touchdowns and completed 68 percent of his passes for 326 yards against the Eagles defense. WR L.T. Smith led the team in receiving with 117 yards on 10 plays and scoring a touchdown. Zach D’Orazio had another solid game catching eight passes for 87 yards and had key blocks throughout. The Zips totaled 197 rushing yards with leading rusher Conor Hundley who averaging 7.6 yards per carry. He also scoring a touchdown.

EMU only converted five of their 13 third down conversions and were forced to punt six times. The EMU offense managed 279 yards in the game and had four turnovers. Leading Akron in tackles again was linebacker Jatavis Brown with 14 tackles and two tackles for loss. Dylan Evans and Devonte Morgan both recovered fumbles and Kris Givens and Drew Phillips caught interceptions from the Eagles’ QB.

The Zips are second in the MAC East behind Bowling Green State University and will return to the gridiron to host Miami (OH) in the annual Military Appreciation game Saturday, Oct. 11. Kickoff begins at 2 p.m. while the tailgate to the game starts at 12 a.m.