Akron finishes first through the rain 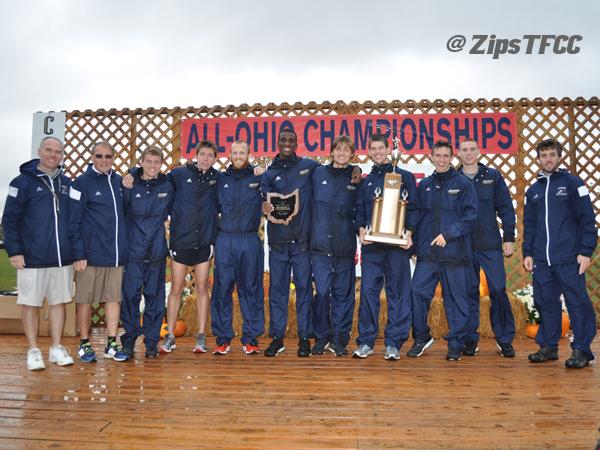 Men's cross country team after their victory in the All-Ohio Championship.

On Friday, Oct. 3, the men’s and women’s cross country team traveled to Cedarville University to run in the All-Ohio Championships. The men won this race last year and they continued their winning ways by appearing as the champion for the first time in school history with thirty-one points out of a total fifty.
Kyle Cochrun and Clayton Murphy both finished inside the top five of the men’s 8K as they placed fourth and fifth. Cochrun came in with a time of 24:52.97, and Murphy posted a time of 25:29.84. Akron also had Trevor Norris, Dan Zupan and Garett Crichlow finish in 13th, 14th and 22nd, respectfully, before Dylan Papp came in as the 25th finisher.
As for the women, they came in seventh place in the 6K which is two spots better than their finish last year at the All-Ohio Championships. Senior Kayla Whitlow helped the Zips secure this spot with her seventh place finish, coming in at a time of 22:28.76. The rest of the scoring five included 49th place Irene Frangos, 51st place Marisa Papp, 59th place Natalie Zedd, and 63th place Michaela Foisy.
Akron will run their next race on Saturday, Oct. 18, when they travel to Indiana to compete at the Pre-Nationals, which will be held by Indiana State University.