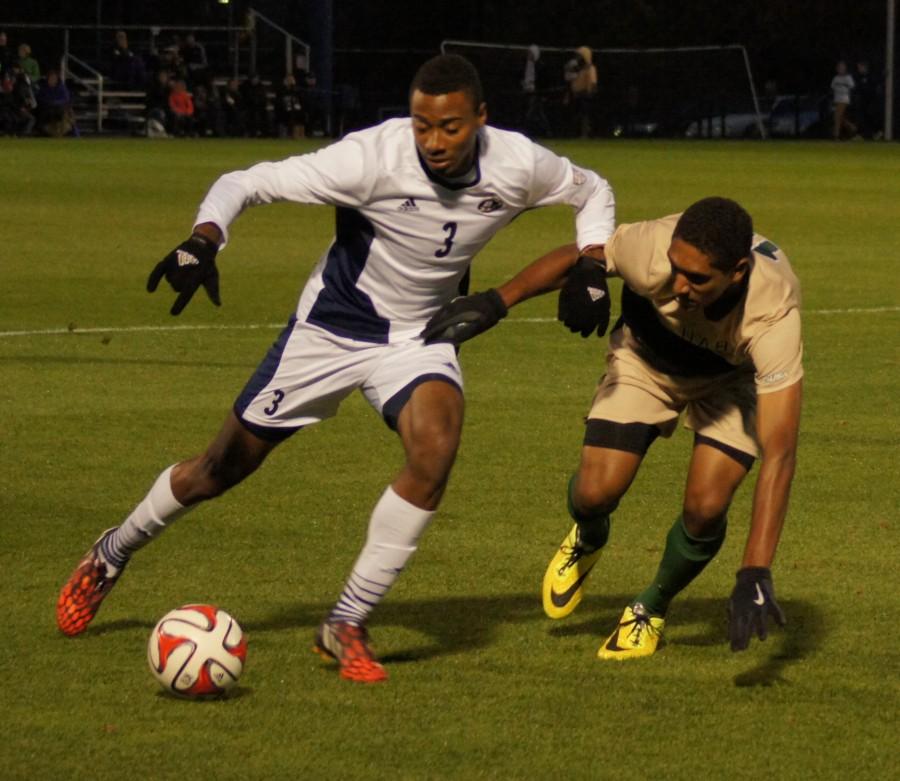 No. 3 Saad Abdul-Salaam recovering the ball from the UAB's attack.

On a frigid Saturday evening, Akron (5-3-1) upset No. 21 Ranked UAB (6-3-1) in shutout fashion 1-0. In the 65th minute, midfielder Adam Najem would break the 1-1 tie off an Andrew Souders’ assist.
Akron’s first chance to score came in the 13th minute off a corner kick and again in the 25th minute with this corner kick headed out by a UAB defender. A third corner came in the 35th minute, which Akron would again fail to convert.
Victor Souto took a shot that flew just over the bar of the goal. UAB also had a corner kick opportunity in the 39th minute headed out by Akron. The teams were scoreless at halftime.
UAB had a few more chances in the second half after the Zips converted in the 65th minute, including a shot on goal in the 81st minute where Jake Fenlason came up big with one of his five huge saves. Fenlason would record his third clean sheet on the season.
Akron would outshoot UAB 12-6. Five of the six shots for the Blazers were on goal, while the Zips had four.
The Zips were strong the entire match, as they overpowered the Blazers who looked out of sync. The large number of students who showed up to fill the hill also played a major role in the win. Leader and captain Najem talked to the students who remained, stating that their rowdiness at the game pushed the Zips to victory. Najem told the students that they truly make an impact at every game and impact the performance of the other teams who play at FirstEnergy Stadium-Cub Cadet Field.
The Zips go on the road as they take on Michigan State Tuesday, Oct. 7 in a 4 p.m. match.