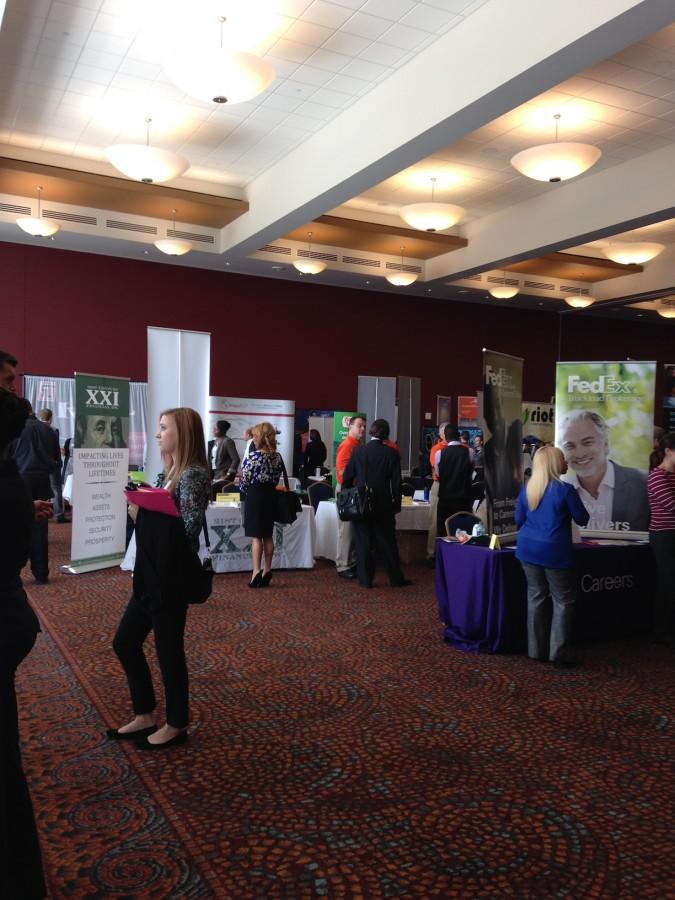 Students gathered in the Student Union for the fall career fair.

Students gathered for a chance to make connections and gain employment at UA’s fall career fair on Wednesday, Oct. 8.

The Union was filled with employers from every sector including eight federal law enforcement agencies that occupied the third floor hallway. Nearby, the Career Center preparation room let students research companies, take pictures for their LinkedIn profile, and perfect resumés on the spot.

“The students are well-prepped. People I’ve noticed are a little better dressed, have more copies of their resumés, and they don’t just walk up to you, they have a little presentation of themselves, which helps us,” said Dan Bendzak of Global Technical Recruiters Advanced.

Many employers shared this sentiment, including Christal Fortunato of Charles Schwab—who last year did not attend because of the fair’s inadequacies.

Bendzak also made note of the fitting location change. “Last time we were in [InfoCision Stadium] and we didn’t get much foot traffic. This year it’s much different. I really like the set up,” said Bendzak.

The event was free for students and alumni. Freshmen were especially encouraged to attend, and though employment for first-year students was less likely, the fair gave freshman a chance to familiarize themselves with an interview environment.

“My goal was more to learn, so I just asked questions and tried to present myself in a way that looks like I’ll be able to add value to the company. I got kind of nervous at the very first company, but when I shook his hand it all went away,” said freshman engineering student Steven Gates.

Emerson Cloud, another first year engineer, found the uniformity of the event to be unfamiliar.

“There are so many people going for the same positions, and with same credentials from the same university. I think it’s just about how personable you are,” said Cloud.

Representative Bryan Schopmeyer from Goodyear Tires had advice to for students who plan on attending career fairs in the future. “You have to think about the conversation in your head. You have to play out what your are going to say. What are the things you can say in a couple of sentences that really grab our attention?” said Schopmeyer.

Laura Carey suggests that students throw their shoulders back, address with confidence, smile, shake hands, make eye contact, and introduce themselves right away.

If students were unable to attend the fall event, UA’s spring career fair is on Wednesday, Feb. 25, 2015. With the success rate just as high next year as this years was.