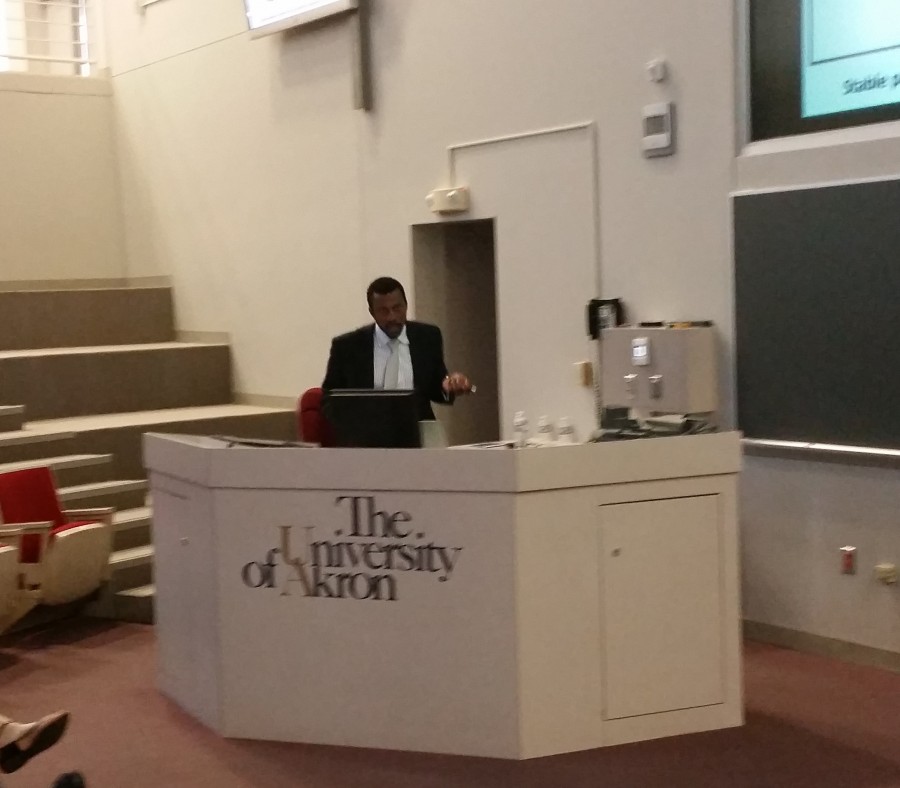 Priestly’s lecture entitled, “Engineering Structure and Properties in Polymer Thin Films and Nanoparticles” touched on the research that he and his current team of students at Princeton are working on.

He talked at length about a process called Matrix Assisted Pulsed Laser Evaporation (MAPLE),  a technique for the deposition of polymers and organic materials. This process assists the creation of materials with ultra-stable light nanocomposites. Much of lecture dealt with his research into the growth of crystals and polymer nanoparticles and techniques used to do so without degradation of the film.

Priestly spoke to over a hundred students and faculty as part of the Polymer and Advanced Materials (PAM) lecture series for approximately one hour on Friday, Oct. 10.

Priestly is an assistant professor at the Department of Chemical & Biological Engineering at the Princeton Institute for the Science and Technology of Materials.

After graduating from Texas Tech University in 2003, Priestly earned his Ph.D. from Northwestern University. He was also recognized by President Obama when he was awarded the Presidential Early Career Award for Scientist and Engineering in 2013.

In 2014 the website, The Root, listed Priestly as one of its 100 most influential people, a list that included many innovators, thinkers and politicians as well as musical artists like Beyoncé Knowles and Pharrell Williams. The list also included athletes such as LeBron James and outspoken Seattle Seahawks defensive back Richard Sherman.

Priestly encouraged questions from the audience pertaining to his research.

The PAM Lecture Series continues at the Goodyear Polymer Center Friday, Oct. 17 at 11 a.m. with Jeremiah Johnson, an assistant professor from the Department of Chemistry at MIT.

The PAM Lecture Series runs through Friday, Nov. 14 with a new guest lecturer visiting the university every Friday.