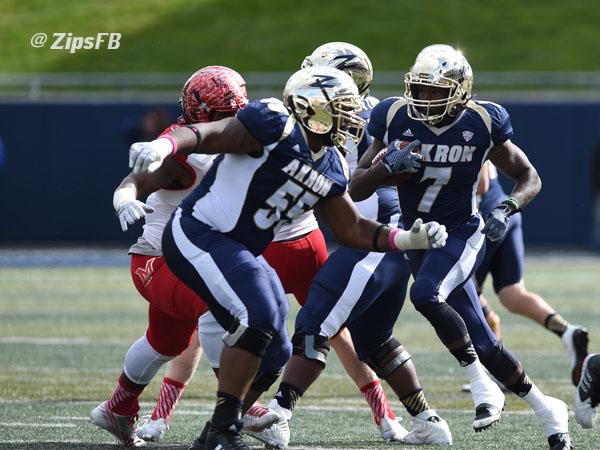 The Zips improved to 4-2 this season and 2-0 in MAC play after their win over the visiting RedHawks of Miami University (OH) by a score of 29-19. This marks Head Coach Terry Bowden his 150th win in his career.

Akron is now on a three game victory streak for the season with a five game streak in MAC play, extending to last season when they finished 5-7 4-4 in MAC.

The first quarter was a defensive battle as neither offense could really do anything against the opposing defense. Akron scored first when they sacked the RedHawks in the end zone, resulting in a safety. Minutes later, the Zips would capitalize on good field position with a 28 yard field goal by Robert Stein.

In the second quarter, the Zips drove down the field again, this time with a touchdown from Jawon Chisholm. The RedHawks scored two passing touchdowns while Stein also completed a 46 yard field goal for a halftime score of 15-13.

The second half had three scoring drives, two belonging to Akron from both Chisholm and Cody Grice. The final scoring drive went to Miami in the last remaining minutes of the game, leading to the final score of 29-19.

Impact players of the game:

On offense, Chisholm had an outstanding game as he rushed for 107 yards on 17 attempts and two touchdowns. Conor Hundley also gained crucial yardage in the game averaging 6.4 yards per carry for 64 yards in the game. Stein, this week’s MAC Special Teams Player of the week, helped the Zips with two field goals and three extra points during the game.

The Zips will go on the road Saturday, Oct. 18 to play against Ohio University.