Author of ‘Orange is the New Black’ visits Akron 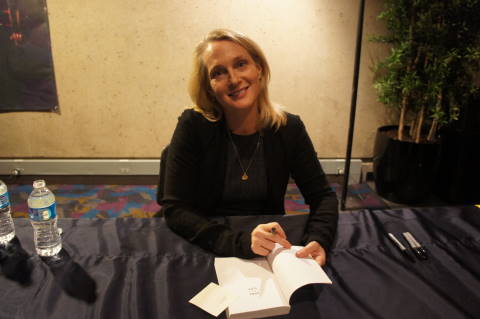 The excitement was palpable as Piper Kerman, author of the memoir Orange is the New Black: My Year in a Woman’s Prison, walked onto the stage of EJ Thomas Hall on Tuesday, Oct. 14.

Kerman’s lecture detailed her 15 months in a correctional facility for a crime she had committed 10 years prior.

Her story began in 1992 when she crossed paths with a “sophisticated” older woman after graduating from Smith College. The woman was involved with narcotics.

“Rather than run in the other direction, as self-preservation would have suggested, I instead followed her around the globe to places that seemed exotic to me and I thought I was having a great adventure,” Kerman said.

Instead, Kerman found herself in a great deal of trouble. A day came when this woman asked Kerman to do something unimaginable: carry a bag of money on a plane from Chicago to Brussels. Kerman agreed, and soon realized she had done something way out of her league.

Not long after, Kerman decided to end the relationship with this woman and started to get her life back on track. She made her way back to California and reconnected with old friends. As the years went by, her life progressed. The experience she had with the woman seemed to recede as time moved forward.

“The truth of the matter is that the consequences of our actions will come back to us one way or another,” Kerman said.

In Kerman’s case, they came back as a knock on her front door in 1998. Two federal agents came to the apartment she was living in with her boyfriend to inform her that she had been indicted in federal court in Chicago.

In 2004, Kerman began serving a 15-month sentence at the federal correctional facility in Danbury, Connecticut. She was inmate #1187-424.

To Kerman’s surprise, the women in the prison approached her with kindness. They showed their concern by asking questions like, “do you need some toothpaste?” and “do you need some shower shoes, because there’s a wicked foot fungus in there.”

The last thing Kerman expected on the first day of prison was to experience kindness at the hands of her fellow prisoners. She witnessed these acts of kindness hundreds of times throughout her time in prison.

Kerman told anecdotes of her experience in a women’s prison, like how everyone gets a nickname in prison, or how she passed the agonizingly slow time by reading books or working her job in electric.

Kerman also brought up issues within the prison system, such as statistics on unfair prison sentences, and the topic of gender and power.

Kerman said her goal when writing her book was to depict the day-to-day life in prison, and what really happens behind those walls.  She hoped her memoir would reach someone who wouldn’t otherwise read about prison. The most important theme in her book was empathy.

“I believe a lack of empathy lies in the heart of every crime,” Kerman said. “Your actions matter in the world a great deal.”

The title of her book, Orange is the New Black, is a play-on-words of women’s fashion. The “orange” in the title signifies the infamous orange jumpsuits worn by prisoners. The title indicates that the book isn’t just about prison, it’s about women. According to Kerman, the title was based on one percentage, 800 percent, which is the percent of increase in the incarceration of women in the United States.

Kerman’s book also inspired a spin-off Netflix series which attracted a large following. Most of the audience raised their hands when Kerman asked who had seen the show.

Kerman ended her lecture by explaining the importance of great institutions, such as colleges, schools, libraries, art centers and hospitals, as anchors of communities.

Kerman took questions from the audience and had a book signing in the lobby of EJ Thomas.