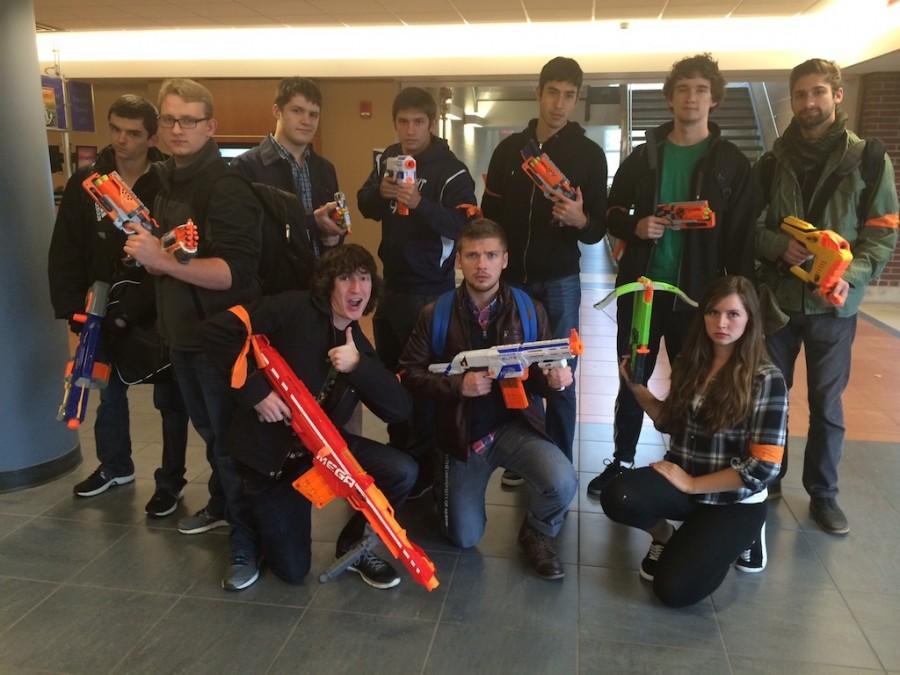 Humans armed with Nerf guns to protect themselves from the zombies

Remember that bad dream about running from Zombies in fear of being bitten? UA has brought the dream to a reality. Humans vs. Zombies a campus-wide game started on Monday, Oct. 20.

Humans have to avoid being tagged by zombies and use selective weapons to protect themselves from the invading horde.

The humans can protect themselves with Nerf guns and sock balls. If a zombie is hit with one of these they must put their bandana around their neck for fifteen minutes and are stunned during this period. As the game comes towards an end, the stun time of zombies will decrease as well.

Of the 179 students participating, four have been infected as of Thursday, Oct. 23. The game will end on Monday, Nov. 3, but they may continue it for another week depending on the weather and how many humans are left.

There are some rules however to this game. Humans are safe while in any building on campus and at campus events such as soccer or football games. The game can only be played in the immediate area of campus, making off campus areas like The Chapel off limits to game play.

After holding a sign up table in the union, sending out messages through Facebook, and building a website, Kenepp was able to build an army for the game to ensue.

“I knew Bowling Green does something similar every year and decided it’d be a fun thing to do,” Kenepp said.

This type of game has been put on by students in the past many times, but was never passed down to the upcoming classes. Kenepp is using this first game of Humans vs. Zombies as a learning period and hopes to pass down the website and game to younger students after he graduates in a couple years. Kenepp hopes these games become a tradition at UA.

You can view the updated standings, rules, and news as the game continues on their website at uakronHvZ.com to see who is still human and who’s been turned. If interested in participating in any upcoming games or helping to make this a new student organization contact [email protected] for more information.