Jackson Browne comes back to E.J. 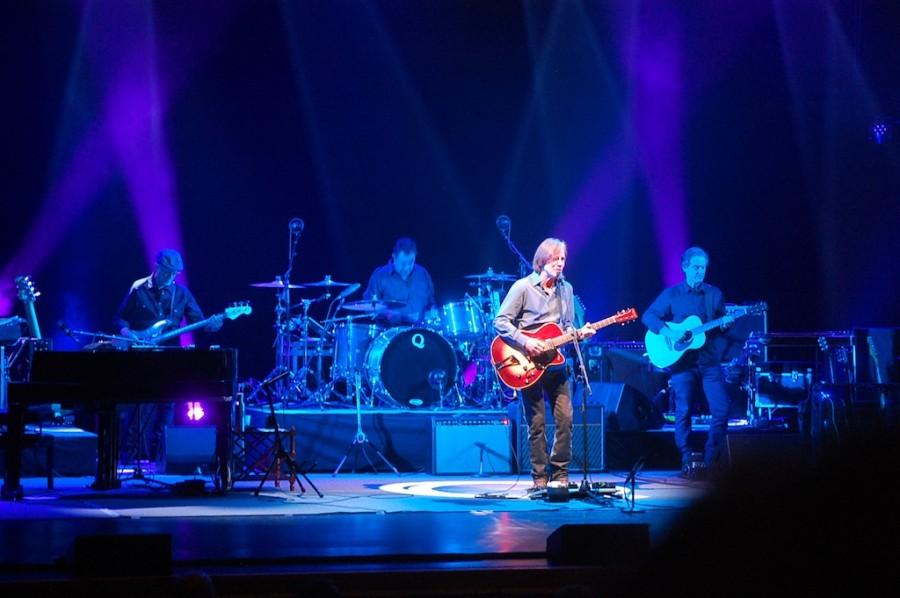 Jackson Browne and his band performing

Jackson Browne, folk singer turned activist, drew a crowd to a sell-out show at EJ Thomas Hall on Wednesday, Oct. 15. Browne solidified his fame in the ‘70s with his hit singles Take it Easy, co-written with Eagles band member Glenn Frey, These Days, Doctor My Eyes,The Pretender and Somebody’s Baby. He was inducted into the Rock and Roll Hall of Fame in 2004, and has not performed at E.J. Thomas for six years.

Browne got his start as a musician before graduating high school in California when he would sing folk songs on the streets. After graduating, he moved to Greenwich Village in 1966. He joined the “Nitty Gritty Dirt Band” and even sang with Nico from the Velvet Underground. In January 2011, he won the 10th annual Independent Music Award for Best Live Performance Album for Love is Strange: En Vivo Con Tino.  Since then, he has supported politicians such as Ralph Nader and John Kerry in their presidential campaigns and is an activist for NukesFree, a group against nuclear weapons.  He, along with other NukesFree members Bonnie Raitt, Graham Nash, Keb Mo and Ben Harper, covered Buffalo Springfield’s For What its Worth to help stop the building of nuclear power plants.

Browne, with his five band members, played a mix of rock, folk, and country songs to a very enthusiastic crowd. Rick and Cathy Hewit said, “We saw him the last time he came here a few years ago. We are a fan of his old stuff, and we think he’s an excellent guitar player.”  Browne rocked the electric guitar while playing In the Shape of a Heart as well as the acoustic guitar in I’m Alive.

Browne opened with The Barricades of Heaven which was released on his 1995 album, Looking East.  He also played songs from his new album called Standing in the Breach, two of which included The Long Way Around and Leaving Winslow, a song which he wrote while riding on a train going from stop to stop for an art exhibition in Arizona.

Standing in the Breach is Browne’s 14th studio album, which came out Tuesday, Oct. 7, and his first since 2008. Other songs on this album include The Birds of St. Marks which he wrote in 1966 but never properly recorded and You Know the Night in which the lyrics were written by Woody Guthrie. He is currently on tour for this album and his last stop will be at the prestigious Royal Albert Hall in London on Monday, Nov. 24.