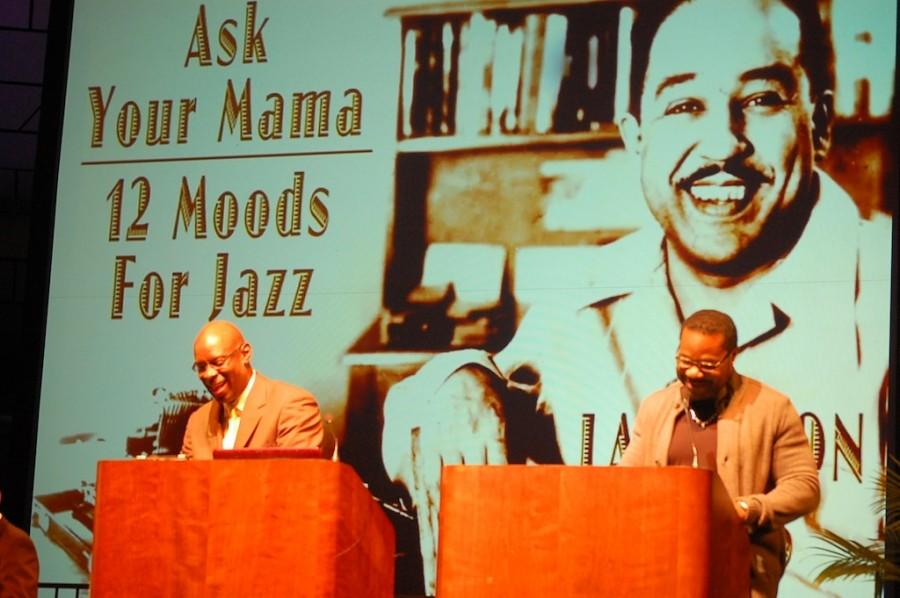 The Langston Hughes Project is a multimedia performance consisting of Ron McCurdy and Malcom Jamal Warner, two very influential people in the media and jazz world. Ron McCurdy is a Ph.D. of music at The University of Southern California and the director of the project. He plays trumpet in the Ron McCurdy Quartet and also was involved in reciting a part  of Hughes’ poem. Malcom Jamal Warner is an actor and director, most noted for his roles in “The Cosby Show” and “Fool’s Gold.” Together, they performed the poem while the other three members of the quartet played blends of jazz with other genres of music. McCurdy told the crowd before the show began, “Embrace this concert as you would a good ol’ southern Baptist church service.”

The poem itself is about the struggle of civil rights and artistic freedom in the 1960s, and the whole piece never got to be performed during Hughes’ life.  By combining the languages of poetry and jazz, Hughes was able to express his struggles in multiple dimensions. There are many political and literary references throughout the poem, from Castro’s Cuba to Ralph Ellison’s Invisible Man.

Along with McCurdy’s trumpet, the remaining three members of the quartet played the stringed bass, piano and drums. The show opened with McCurdy walking from the back row of the audience to the stage while playing a trumpet solo. Each of the other quartet members also had their own solos throughout the show.

In the background of the podiums where Warner and McCurdy were standing was a slideshow of pictures and video clips of influential people and events in Hughes’ life. It showed various faces, streets, crowds, flags and fields.

McCurdy also sang throughout the show, “Nobody knows the trouble’s I’ve seen,” and a sample from Hesitation Blues. The sample from was originally meant to be sung by a man who wanted to be intimate with a lady, but was adapted by Hughes to mean waiting to be free from racial social bounds.

The “12 moods” ranged from soft melodies to free form to blending jazz with other genres of music such as African mambo, Caribbean calypso, gospel, bebop, and Latin cha-cha.