Akron native comes back to perform, and brings her fiancé 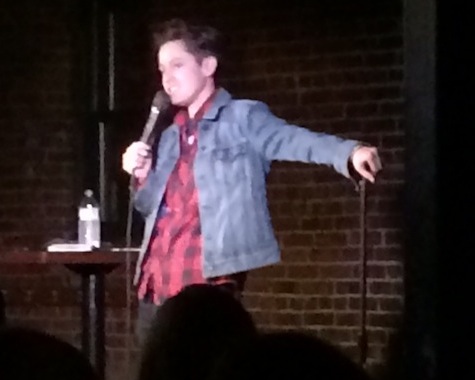 Musica in downtown Akron held a comedy night featuring Rhea Butcher and Cameron Esposito. Butcher is an Akron native who grew up in Kenmore and this was her first performance in her hometown on Monday, Oct. 13. Opening for her fiancé, Esposito, they were each able to create jokes around each of their points of view.

Butcher opened her act with many jokes about her last name, and its complete relevance to her life. “It’s perfect for me, because I’m butcher than you,” she said in one joke. As an Akronite she made sure to come with plenty of jokes that involved her hometown. Being from Kenmore, she made fun of how that was impressive to other people of Akron, and she earned her jean jacket because of it.

She then transitioned into her sleepwalking disability that both comedians were able to joke about. Butcher joked about how anticlimactic the sleepwalking actually is and that it’s more of just standing around rather than walking. Butcher Related the experience to a child who thinks they’re playing a claw machine they never put coins into. They think they’re in control, but really have none at all. Receiving a thunder of claps from the audience after her set, the crowd loved her performance.

“This was Rhea’s first time performing in Akron, and she did awesome,” Esposito said.

Butcher’s fiancé, Esposito then took the stage to be the feature performer for the night. Esposito has performed on The Late Late Show with Craig Ferguson on CBS, IFC’s Maron and many more network shows. This performance for her was also to promote her new album, Same Sex Symbol which was released on Oct. 7. Her album has been number one on iTunes for 5 days, beating out Sarah Silverman, Gallagher, and Weird Al Yankovic.

Esposito’s act carried over into stories about her ex-girlfriend from South Africa and her obsession with the Terminator movies. Asking different audience members which Terminator movie was their favorite, and going off of that with unknown facts about each movie but still managing it into hilarious comedy. Esposito also used her anecdote of meeting one of her heroes, Kristanna Loken (Arnold Schwarzenegger’s advisory in Terminator 3) in South Africa, as a joke for her set.

Esposito’s set was great for a mature audience and was very easy to laugh along with each joke. Her delivery was phenomenal and is unique to her style of comedy.