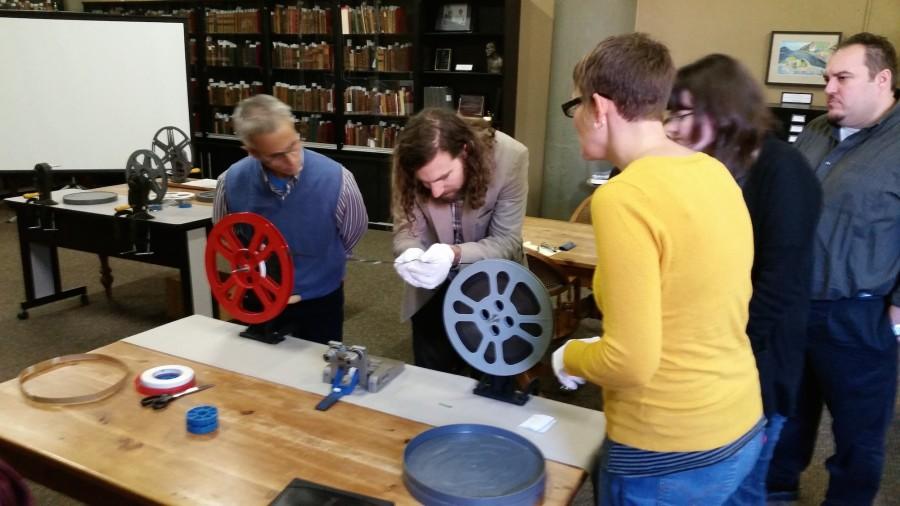 The Cummings Center for the History of Psychology hosted a workshop to teach participants how to properly handle and store 16-millimeter film on Friday, Oct. 24.

Visiting instructor, Bleakley McDowell, touched on some of the basics regarding 16-mm film. McDowell explained how most films made prior to 1930 simply don’t exist anymore due to the film’s tendency to deteriorate after extended periods of time.

Cellulose nitrate film was also highly flammable which gave users incentive to move on from the format.

McDowell distributed gloves and demonstrated how to check large reels of film for imperfections. This process involved two large upright reels on a table and a crack to spin the reels in order to move from one reel to another.

While the film is moving from reel to reel, the person inspecting the film is able to see any tears, holes or missing portions of the film that need to be repaired.

Many flaws can be repaired with a simple piece of tape, or by cutting out a single frame of the film and reattaching the two longer pieces.

These skills are important for archiving old footage, not unlike the footage found in the archives at The University of Akron. This process is also used in national organizations such as the National Library of Congress.

McDowell, a student close to graduating from New York University with a degree from the Moving Image and Archive Preservation Program, originally came to the university in the summer as an intern to help with the much larger task of digitizing old film that belonged to the Cummings Center.

“Researchers wanted access to these films so part of my internship was specifically to inspect, repair and then help set up this digitization program so that researchers could see these films,” said McDowell. “Otherwise, the only way to see them was to come here and put them on a projector, which is not going to happen for most researchers.”

The workshop was also part of Archives Month, an event by the Society of Ohio Archivists which takes place during October every year.