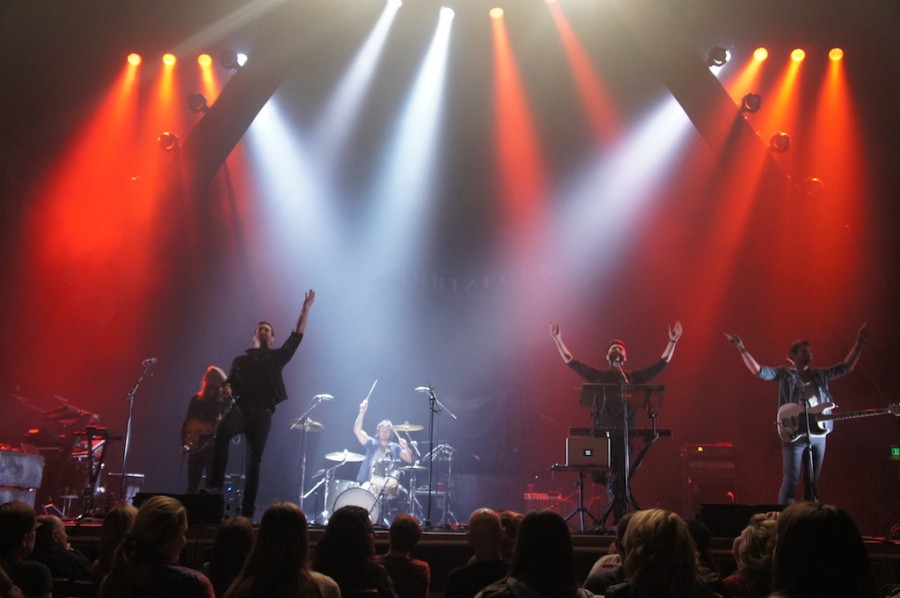 The band urges the crowd to clap and sing along.

The up-and-coming band named Grizfolk sat down for an interview with The Buchtelite on Wednesday, Oct. 22. Grizfolk opened up for the award-winning band, Bastille when they performed at E.J. Thomas Hall.

Q: How did you guys start as a band?

Adam: We met in Los Angeles. We were all kind of working on different projects. I was in a band with Bill and Brenden prior to this. I was working with Fredrik at the same time, writing songs. We met Sebastian while we were writing some songs and we realized we wanted to pursue a band. Now we’re traveling!

Q: How did you guys think of the band name?

Sebastian: It started off as a nickname we had for Adam. We called him Griz Adams back in the day and we changed it to “Grizfolk” to encompass the people around us; the family, friends, fans that’s helped us along the way.

Q: What genre do you guys fall under?

Q: Do people think that from your name?

Adam: Yeah they think that the first time they see us live and then they realize we’re a rock band.

Q: Do you guys have a favorite collective band you can all agree on?

Q: So how would you describe your lyrics?

Adam: We have a couple love songs but we kind of try to steer away from love songs. I guess they would be somewhat emotional.

Sebastian: Yeah, when we write songs we picture a landscape where the story’s going to take place. We travel a lot so we see a lot of things so we draw a description of that too.

Q: Who writes the lyrics?

Q: Where do you get your inspiration from?

Adam: Lately it’s been traveling. We’ve been all over the world since last March. But we draw inspiration from everything. From experiences and missing home, missing friends and family.

Q: Can you tell me the background of The Struggle?

Adam: Well it was one of the first songs we wrote and actually when we wrote it, that was before we had a band. We were called Griz Adams when we didn’t really know if it was going to be a band. And we put it online on SoundCloud and it started going viral. We were actually Griz Adams at the time. The song opened up doors for the band. It’s the reason why we’re here right now.

Adam: It’s awesome. We’re getting to play in all these venues we’ve always dreamed of playing and travel to all these places we’ve always wanted to go to and make a lot of new fans. It’s been really good to learn from them because they’re on a much higher level than we are. It’s really cool to just see what they do, how they interact with people and how they live their daily life.

Q: What’s a day in the life like for Grizfolk?

Adam: On a normal day we have to drive to the city during the day and then we set up, do a soundcheck, maybe hang out for a little bit like this.

Sebastian: It’s a lot of traveling, and we try to work as much as possible. We’re all on our laptops writing songs as we’re in the van. And then after the show we always go out and meet the fans.

Q: What is your guys’ favorite moment so far as a band?

Brenden: Traveling to Europe was awesome. We toured with Bastille. We went to like eight different countries.

Adam: We also played at Radio City with Bastille about a week ago. We spent two nights there.

Q: So what are your future plans?

Adam: We’re finishing our record right now; we’re almost done with it. Then we’ll probably just keep touring. Next year there’s going to be a lot of festivals and stuff like that. We want to go back to Europe. And we want to go to South America and Asia.

All: Thanks for having us!