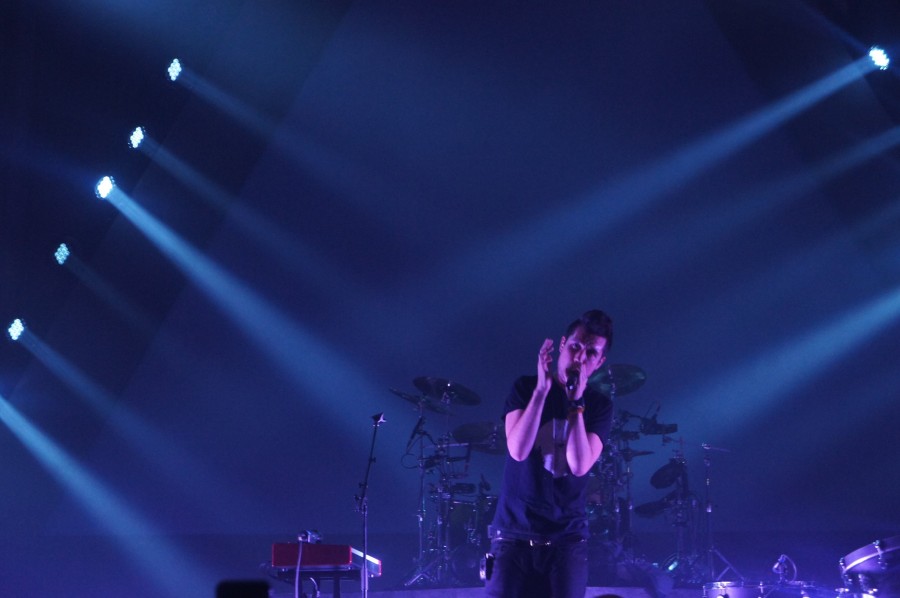 Akron was booming with energy when the award-winning band, Bastille, took the stage of E.J. Thomas Hall on Wednesday, Oct. 22.

The English alternative rock band performed songs from their debut album, Bad Blood, to a packed audience. Bastille’s energy was immediately infectious as they opened with Things We Lost in the Fire, one of their many hit singles. The crowd was on their feet and singing along while scenic lights complimented the stage.

Full of exuberance and spirit, lead singer Dan Smith was the focal point of the show. There wasn’t a moment where he wasn’t jumping or dancing to the rhythm of the music. Many times throughout the performance he would grab a drumstick and strike a pair of floor toms in the center of the stage.

Bastille’s music encompasses synth-driven, electronic beats with catchy choruses and heartfelt, melancholic lyrics. About halfway through the show, Smith said to the audience, “If anyone knows our album, they know we have a lot of depressing songs. This next song has the most depth of them all.” The band then started playing Oblivion, a song about the paradox of aging gracefully.

In the past, Bastille had released a mixtape of the band covering songs. One of these songs was No Scrubs by TLC, which they performed at the show.

During one of the songs, Smith left the stage and walked into the crowd, climbing over chairs and maneuvering through the audience.

Smith also got the audience involved by asking to join him in dancing. “If you guys haven’t noticed, I’m a terribly bad dancer,” Smith told the crowd. “Could you guys help me out with this one?” Bastille then started the song, Of the Night, in which Smith guided the audience to crouch down low right before the chorus started, and then jump up and dance when they heard the lyrics “This is the rhythm of the night/This is the rhythm of my life.”

Other songs that Bastille performed included Flaws, Laughter Lines, The Draw, These Streets, Weight of Living, Bad Blood, The Silence, Get Home, and Overjoyed.

The band played what is perhaps their most well-known single, Pompeii. As the final lines of the song faded out, Smith thanked the crowd for a wonderful night.