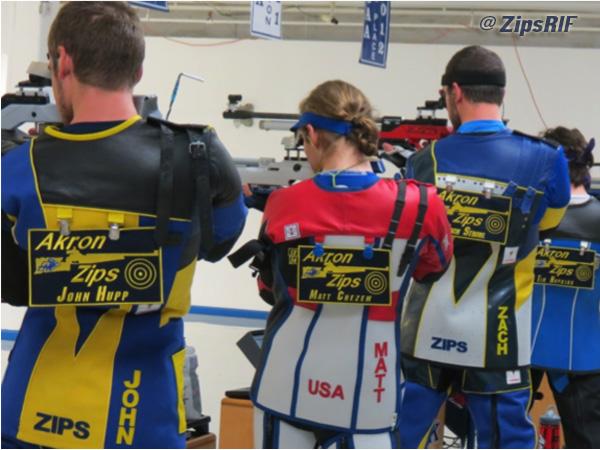 The No. 1 ranked West Virginia University team traveled to UA this weekend to face off against the No. 14 ranked Akron Zips.

Even though the outcome favored WVU by a score of 4697 to the Zips 4611, in the smallbore division the Zips yet again re-wrote the school record book. The old Akron smallbore record of 2289 set last season against the US Air Force Academy was crushed when the Zips sharpshooters raised the bar to an amazing 2297.

“To be honest, we didn’t see this coming,” head coach Newt Engle said. “We train very hard with the philosophy of firing single shot matches and letting the totals be what they may. This is a good example of what can happen when you compete like you train.”

Finishing 3rd overall in the smallbore division with a score of 581 was junior hotshot Matt Chezem. He was amply supported by his teammates, junior Tim Hopkins (575), sophomore Zach Strohl (572) and freshman phenom Julia Hatch (569). The scores from this squad of athletes significantly raised the bar for future records with the new smallbore mark of 2297.

Air rifle proved to the Achilles heel for the Zips at this match as the team total fell below the 2330s for the first time this season. However, leading the Zips was the duo of Chezem and Strohl who each fired a fine score of 588 out of the possible 600. This is a new personal best for Strohl.

The Akron squad has a week to prepare for the match which will involve a trip to the city of brotherly love when they travel to the University of the Sciences in Philadelphia. The USP match is scheduled for 9 a.m. on Saturday, Nov. 1.

Click the link below to see the scores of the match.