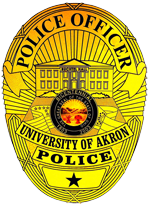 Akron police have made an arrest in connection to a series of robberies that occurred near the university over the weekend.

UAPD and Akron city police are currently working together on an investigation to link the suspect to the robberies.

A series of robberies took place over the weekend when three people were robbed between 2 a.m. and 5 p.m. on Sunday, Oct. 26.

Late Monday evening, police were notified of a fourth robbery by a suspect matching that of the one from the first three robberies.