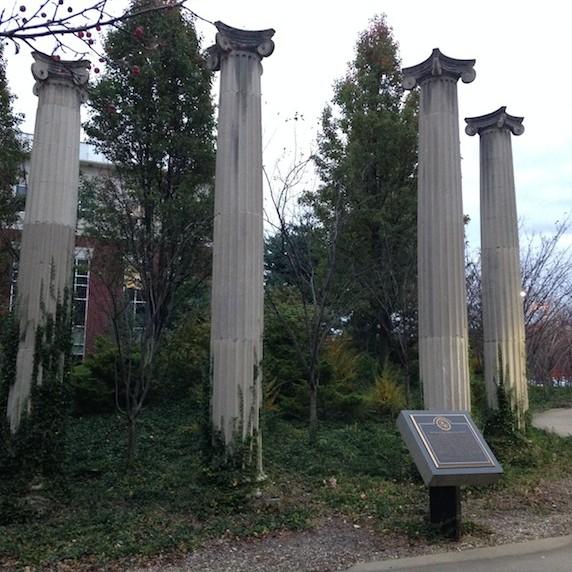 Behind Bierce library stands four massive free standing pillars and a classical Romanesque theater. When were they erected and for what purpose? There is a history behind these prominent yet mysterious structures.

The Lewis C. Turner Memorial Amphitheater was completed Sept. 4, 2002, in dedication to it’s namesake, Lewis C. Turner, who taught for more than 25 years at The University of Akron.

The memorial is dubbed an amphitheater, though a traditional amphitheater is shaped like a modern stadium. Turner’s memorial closely resembles the semi-circular amphitheaters of Rome and Greece. Due to their acoustics, these theaters were used for plays and speakers. It is said that a spectator farthest from the stage can hear the speaker as clearly and loudly as those in front rows.

According to the plaque in front of the pillars, Turner worked under the U.S. Army Corps of Engineers in France during World War I. He “oversaw site selection and construction of the National Cemetery at Belleau Wood, Aisne, France, where more than 2,000 U.S. soldiers are interred.”

What this plaque emphasizes, however, is Turner’s dedication to rhetoric.

“No matter what career you choose to follow, it will require you to read, write and speak the English language fluently. Effective communication is the key to success,” is a quotation attributed to Turner. According to the plaque, he delivered more than 400 university and high school commencement addresses throughout the U.S.

It is only fitting that Turner’s memorial be grand pillars and an amphitheater, “made possible by Dr. Paul E. Martin ’35, [these] offer students a special venue for public discourse, entertainment and learning.”