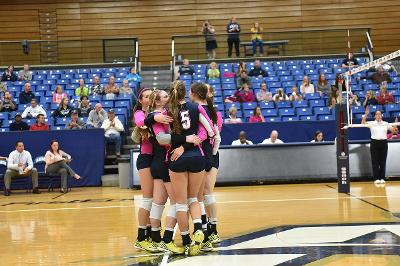 Volleyball celebrating a victory over the Central Michigan University.

With the streak continuing with the Zips volleyball losing their weekend match ups on Friday, Oct. 31- Nov. 1 the Zips have now won only one sets in their last 16 tries.

Bowling Green, UA’s matchup on Friday, came out to play and end their losing streak while also adding to their MAC wins by defeated the Zips in three straight sets. During Saturday’s match against the RedHawks of Miami (OH) the Zips battled but couldn’t get anything going as MU won the match with a set score of three to one.

During their last meeting, the Zips took down BGSU three sets to zero, but the team who has only won six matches after this weekend did not allow Akron to score more than 18 points in any set. Akron’s defense struggled throughout the match, and UA could not overcome the deficit.

Against Miami, Akron took the second set to extra points and came out as victors. Unfortunately, sets one, three and four provided difficulty while the RedHawks did not allow UA to score more than 17 points in any of the other sets.

The Zips (8-19) will finish out their regular season at home with a weekend matchup against two rivals. First, the Bobcats of Ohio University (19-4, 12-0) who sits on top of the MAC standings, followed by senior night matchup against a Kent State team (13-12, 5-7) who is looking to sweep the Zips for the season and gain a full point in the PNC Bank Wagon Wheel Challenge.