The chance of a lifetime 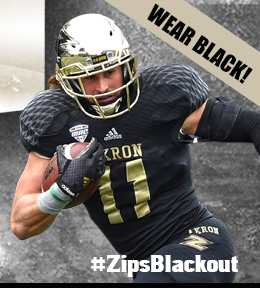 Tuesday’s game against the visiting Falcons of Bowling Green State University will be one to remember, even before the first play. The reason behind this memorial game is that four students will exit the game winning free tuition for the spring semester.

“We are investing in our student body to thank them for their ongoing support of Coach Bowden and our team, and we hope this promotion encourages them to attend this huge, nationally televised game in record numbers,” Tom Wistrcill said, Director of Athletics at The University of Akron.

Here’s how to win:

Come to the game, by entering in the game and swiping your Zip Card to automatically enter in the drawing after that three students will win the prize valued at over $4,000. The other way to win is through the Social Media Challenge. Students using the hashtag #ZipsBlackout on their social media sites, the student that uses the hashtag the most before the noon deadline will also win the free tuition prize.

“I can’t wait to congratulate the four Zips who will walk out of InfoCision Stadium with their spring tuition bill paid for and thank them for supporting our football program.” Wistrcill continued to say.

The Tuesday, Nov. 4 matchup between the top two schools in the MAC east should already be a great game but with the addition of the prizes, game coverage on ESPN2, a chili cook off before the game and the first blackout under the lights in InfoCision there’s no way you shouldn’t be there and cheer on UA to a first place spot in the division.

This is what students had to say about the chance of free tuition:

Ben McCaulley, a junior Athletic training said “With the price of college, I think that it is an awesome way to help students pay for college.”

Winnie Pham a junior pre med/biochemistry said “Oh yeah, I saw the flier about! It would be so awesome, plus it will attract lots of people to go to the game. I am even trying to promote this with the groups I am in as well.”

Nick Lawerson a senior math and history education said “My grandfather just called me to tell me about it, but I have to work. So there goes that.”

Antonio Barnes, a senior television and radio production, said “I want to go to the game so bad so I could hopefully win the tuition. Talk about saving some money!”

Patrick Lescallett, a senior in business, said “I think it’s wonderful and we should get more opportunities like this to help pay for tuition or even books.”

Alyssa Pennington, a sophomore speech-language pathology and audiology, said “I think going to a free game, having fun with my friends, and having a shot at free tuition is a win-win. I’m there!”