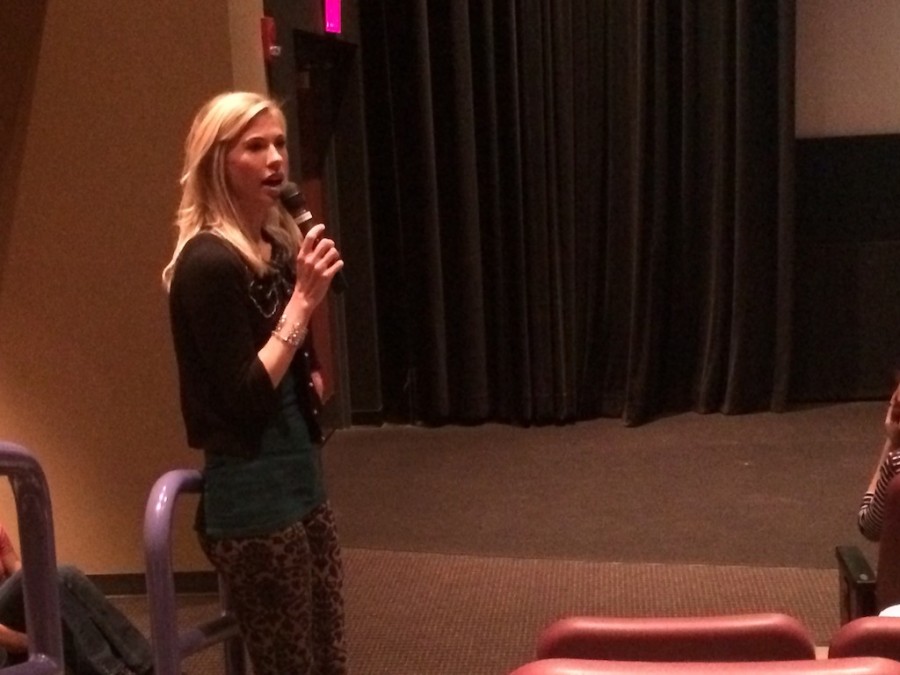 Kelly Answers audience questions about her speech and presentation

Kelly was born missing her left hand, but didn’t let that affect her in anything she’s accomplished.

“I lived life the way that made sense to me,” Kelly said.

Her speech began with how to not answer Miss America questions and a short video of bad answers during the pageants over the years. This was to bring out and dismantle the stereotypes that people have conceived about them through society. This was to address the perceptions people have versus the reality of them in our everyday lives.

She expanded on this notion of perception versus reality by showing the audience pictures of famous people, such as Peyton Manning, Beyoncé, Bill Gates and Pope Francis, and asking what were some traits they held. After receiving the audiences answers, she proceeded to break down why all of these traits were just a perception we had about these people and very well could not be the reality since no one knew them personally.

Graduating from The University of Nebraska with a major in theater management, she then brought up a theory by Michael Chekhov. The theory stated that there are three kinds of people in the acting world: head, heart, and groin characters, each express different attributes in their personality.

Kelly had the audience move to different sides of the theater based on their personal perception of how they walked. After people were separated she had them talk to neighbors about what stereotypical boxes they could be put into and how they also break away from those stereotypes at the same time.

Towards the end of the speech and group exercises, Kelly compared herself to Nemo from “Finding Nemo,” and that she has her own “lucky fin” to be proud of. As she tours schools across the nation, she uses this analogy to help students understand that it isn’t something to be ashamed of, but something she has to deal with and not let it hold her back.

“Much of what I’m doing is to prove to people I can do it, it’s created an over independence in me,” Kelly said.

Concluding the speech, she shared her hashtag #WalkwithDiversity and encouraged students to find people of different walks, based on the Chekhov’s theory, and take a picture together to share on Instagram. Most of her speech incorporated breaking free from stereotypes on ourselves and the ones that are put onto other people.