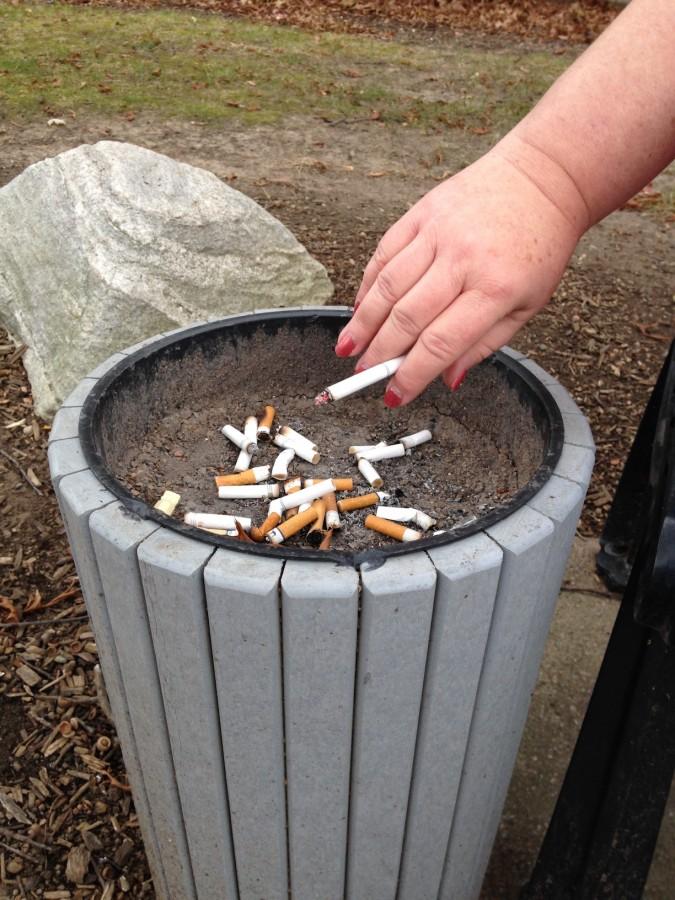 Smoking may soon be prohibited everywhere on UA's campus.

The University Council will hear a proposal later this month that aims to ban tobacco on campus.

Smoking is a pervasive controversy. According to Americans for Nonsmokers’ Rights, there are 1,477 smoke-free college campuses nationwide. The University of Akron’s current policy prohibits smoking within 25 feet of any entrance, window or ventilation system of an enclosed area.

Kristine Kraft, assistant professor in the Allied Health Department and chief advocate of the smoking ban, thinks enforcement of the 25-foot rule is complicated; banning smoking altogether is easier.

“How we enforce [the rule] is a huge problem. I mean, do we really want to write tickets?” Kraft said.

Students often smoke between or after classes near the main entrances of buildings. A common complaint is that students passing through these doors tend to catch second-hand smoke while allowing smoke to pervade the building. Smoke from below can drift through open classroom windows as well.

Students and faculty disagree on whether this is an annoyance or a serious health problem.

“It doesn’t really make that much of a difference to me, though I think that it would be much better to enforce the 25-foot rule than try to ban smoking altogether,” said non-smoker student Jon Wittmer.

“I used to be a non-smoker and I know how it feels; I didn’t like the smell. So now I just stay away from the doors,” said Malfi, previously unaware of UA’s 25-foot rule.

“I don’t see any harm in people smoking outdoors, where there is plenty of ventilation. Making UA a completely smoke-free campus is a bit overboard,”  Frase said.

Along with other universities like Ohio State and Cleveland State, many institutions are becoming smoke-free. The City of Parma bans smoking on all public property. Ironically, Camel, one of the largest cigarette producers, banned smoking on their facilities less than two weeks ago.

Kristine Kraft has worked on the issue for more than three years. Only in the last six weeks have her efforts been noticed. Her ultimate goal is for an entire “wellness initiative” to improve students’ mental and financial health, as well as physical.

Smoking is only a part of the proposed tobacco ban, which includes e-cigarettes, hookahs and chewing tobacco as well.

Currently, students can smoke hookah pens or e-cigarettes indoors on UA’s campus. It is up to each professor’s syllabus to allow it in the classroom. But as the CDC releases new information on the dangers of e-cigarettes, they may be regulated as strictly as cigarettes.