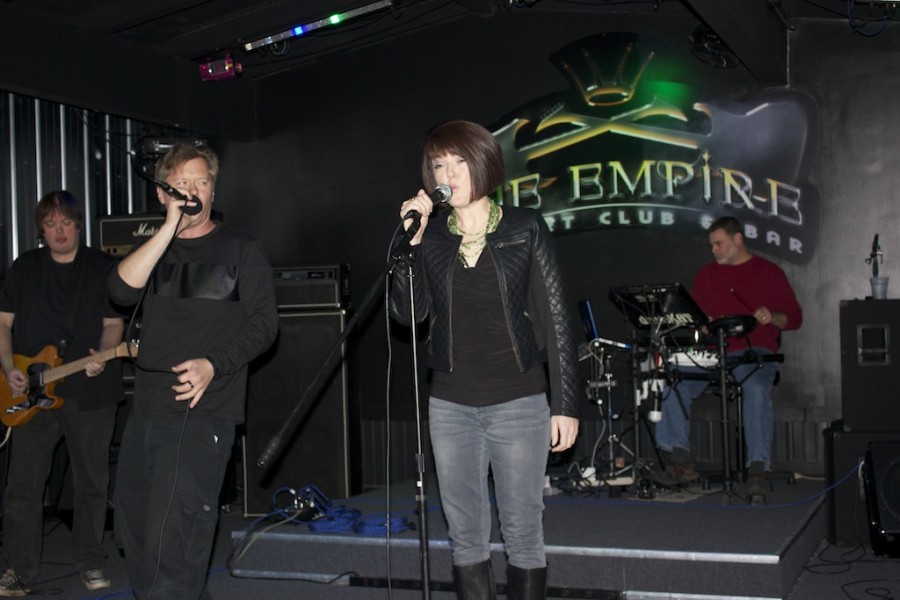 Electro-pop band Frigid Touch released their new album, Swell on Saturday, Nov. 15 at The Empire Concert Club & Bar in Akron. This is their first full album, having only released singles in the past year.

The band consists of five members: Mike Crooker, Chris Foldi, Michelle Strong, Rob Crossley, and Andrew Wilco. Foldi and Strong write the lyrics and sing while Crooker and Wilco play guitar and Crossley plays drums. Crooker and Crossley are both UA graduates. All of the band members are from different parts of Northeast Ohio including Cleveland, Akron, and Kent.

Crooker and Foldi have known each other for about 10 years, but haven’t been in a band together until Frigid Touch. Crooker would do remixes for Foldi’s band and stopped playing altogether in 1996. Last year, Crooker wrote the song Cascade and composed it as a demo. Once Strong sang it, they decided to put the band together.

“Once I heard it, I was like ‘Oh! We need to release this,’” Crooker said. They put Cascade on their new album along with their newer compositions.

“We spent a lot of time working on the record from those initial four songs, but that extra year between that EP and this CD allowed those other songs to be worked on,” Crooker said. “This really allowed them to be layered so they reward you on the fourth or fifth listen, the songs are pretty crisp and clean but it does have some stuff hiding underneath that you might not hear the first time listening.”

Frigid Touch’s lyrics are about technology and how it shapes people psychologically. “I don’t know if there is a message I’m trying to get across in a concrete sense, but more of here’s what I have to say and I kind of want the listener to interpret that how they want. I’m trying to paint a canvas of my reaction to constantly being connected,” Foldi said. “The twin vocal thing is what gives us a little bit of distinction with Michelle and Chris singing, and there is a lot of layering in that as well,” Crooker said.

Their music also contains a plethora of synthesizers, bells, and tones that lay underneath the forefront instrumentals. “Six, eight months later we always find something to add in, we go back and recut it and find what the song was missing,” Crooker said. “Instead of being a guitar and bass band, we’re grabbing stuff from everywhere,” Foldi said.

At the show, they also were giving away copies of “Swell” to anyone who wanted them for free. This show was the first of their two album release shows, the second will be played at Mahall’s in Lakewood on Nov. 20 where they will also have free copies of their CD. Their CD can be found on iTunes on Nov. 18 along with Amazon.com, Spotify, and numerous other music-sharing sites.

They have about 16 other songs currently being worked on that they plan to release sometime next year in another album. Although their show at Mahall’s on Nov. 20 is their last show for the winter, Frigid Touch will be performing live again come spring. To view any of their videos or listen to a handful of their songs, you can go to their website frigidtouch.com.