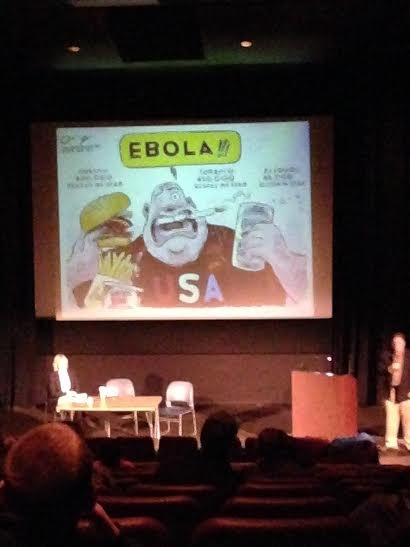 A cartoon explaining the panic of Americans about Ebola

On Nov. 17 at the Student Union Theater, a panel of public health professionals came to The University of Akron to discuss the facts, myths and implications of Ebola.

The panelists included Terry O’Sullivan, director of the Center for Emergency Management and Homeland Security Policy Research at The University of Akron, Katherine A. Van Tassel, director of the Public Health Law and Science Center and Health Law Program at The University of Akron, and Donna Skoda, Summit County Public Health assistant health commissioner.

The panelists focused on facts about Ebola and how to prevent catching the virus. As far as treatment goes, there has been nothing approved by the FDA, but one of the main things you can do to prevent this virus is to keep your hands clean, which is good to do to prevent any sickness.

More prevention includes avoiding travel to West African countries such as Sierra Leone and Guinea while also avoiding contact with blood and bodily fluids. According to O’Sullivan, “as of Nov. 9, 2014, there have been 14,098 case counts of people who are thought to have this virus, 8,715 have been lab confirmed, and 5,160 deaths.” With the big story about the nurse from Summit County who was thought to have Ebola, many people have wondered if Ebola has reached Ohio and the surrounding Akron area, but according to the Center for Disease Control, there have been zero cases in Ohio for Ebola.

Even though no cases have been confirmed, there have been precise cleanings at the Cleveland-Hopkins airport to make sure passengers traveling back and forth are safe. The panel also spoke about how even though Ebola has been the main talk the past several months; it’s not close to being a major public health epidemic in the U.S.

There have been only two secondary cases in the U.S, and the panelists made it very clear that although Ebola is extremely infectious, it is not extremely contagious and continues to be in the moderately contagious list of viruses.

As the panel moved forward to give the audience more insight about Ebola, they spoke about how it’s affecting western countries in Africa. The main threat remains in West Africa and according to Van Tassel, since October of 2014, disturbingly 30 percent of Ebola cases are going unknown because people are afraid to go to the doctor. This can be a very big issue because of the patients aren’t being treated, 1.5 million people in West Africa could get Ebola by January of 2015.

Towards the end of the discussion, the panel spoke about how richer countries such as America can help fight Ebola. “Ebola is too easy to control and too difficult to catch,” O’Sullivan said. The panel stated that there haven’t been many cases of Ebola in the U.S but there have been cases of nurses who have went overseas to help Ebola patients. Kaci Hickox was an example of a nurse that went to Sierra Leone to help ill patients and upon her return said she was “treated like a criminal” because the U.S government assumed she might have caught the disease.

Van Tassel reminded the audience not to let this stop us from helping overseas and encouraged people to be more knowledgeable about the disease. This panel discussion really gave the audience a lot of insight and also facts the public may not have known.