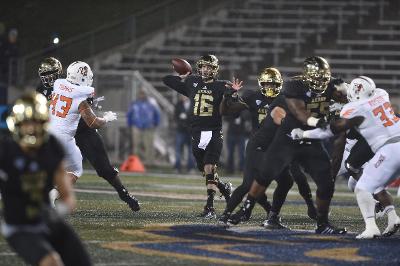 On Tuesday, Nov. 18, the Zips will host their last home game of the season against UMass. This will be the third matchup between the schools with the series tied at one apiece. Akron will look to end their four game losing streak.

UMass has a record of 3-3 in the MAC and averages just over 30 points in a game. They are a fast moving offense earning 5.9 yards per play for a total of 448.8 yards in every game. UMass is a team that passes the ball well off the arm of Blake Frohnapfel, but also has a two back system that can destroy and eat the clock up when it has to. The Minutemen offense has turned the ball over 19 times while their defense has gained 15 turnovers this season. This defense also gives up 441 yards and 32.6 points per game, making them one of the worst defenses in the MAC. They have 12 sacks on the season and rank in the bottom half the conference in both pass and rush defense. This is something that the Akron offense will have to capitalize on.

On defense, watch for Jovan Santos-Knox, Stanley Andre and Joe Colton to make an impact. All three have 50 plus tackles this season. Randall Jeete has four interceptions in the season and Khary Bailey-Smith has three interceptions. UMass’ has two players Kassan Messiah and Sha-Ki Holiness with two sacks each, which leads the team.

Akron has now dropped to a 4-6 record after losing four straight games. The defense continues to be the Zips strong point, allowing an average of 24 points and 380 yards per game, making them third in the conference. The Zips have also sacked the opposing quarterback 24 times and give up a conference low, 37.4 percent in third down conversion. This Zips defense also knows how to get turnovers with 19 of them in the season, making them tied for third in that category.

Conor Hundley and Jawon Chisholm will both be in the back for the Zips on offense, combining for eight touchdowns and 821 yards. The quarterback could go to either Kyle Pohl or Tommy Woodson. They both have six interceptions and around the same percentage of completion, Pohl 54.8 percent and Woodson 53.1 percent. Pohl, however, leads with touchdowns (7), yards (1721), and average per game (215). Top receivers for the Zips are Zack D’Orazio, L.T. Smith, and M Taylor-Bennett who has seven touchdowns and 1182 yards combined.

On defense, look for Jatavis Brown C.J. Mizell, and Justin March to make an impact in this game as they are the two three in tackles. Jerome Lane is the sack leader with five followed by Brown and Nordly Capi with four a piece. Bre’ Ford, Kris Givens and DeAndre Scott all have two interceptions in the season as well and will look to add to that against the Minutemen Tuesday.

Bring your space heaters, blankets, and every layer you have to cheer on your Zips and honor the seniors for one last home game in InfoCision Stadium at 7 p.m. If you can’t come out to watch, log on to ESPN3 to watch the game on your laptop or computer.