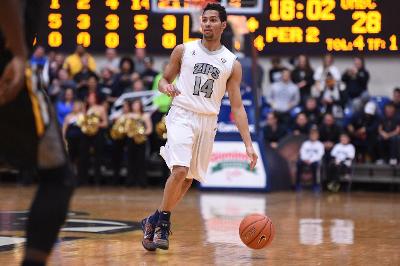 Noah Robotham taking the ball up the court.

Home opener victory over the Retrievers of the University of Maryland Baltimore County.

The Zips started their season off right with a win over UMBC, 74-57. The first half the game was close. The Retrievers even reached a eight point lead, but the Zips came back and at half lead the score 37-26.

Next up, the Zips travel south to compete in the Gildan Charleston Classic in South Carolina where they will first play the Trojans of Southern California who lost their first game at home against Portland State 76-68.

Look for Jordan McLaughlin, Katin Reinhardt, Malik Martin and Darion Clark to make an impact and attempt to win their first game of the season.