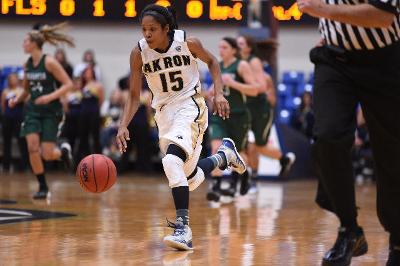 Anita Brown charging up the court in their win over Binghamton.

The women’s basketball team began their season in winning fashion, defeating both Binghamton and Northern Kentucky in the Akron Classic.

The ladies began their regular season on Friday, Nov. 14 with an 80-49 win over Binghamton. Junior Anita Brown started out the season strong scoring a game and career high 29 points in her 33 minutes played. Brown and Sina King each recorded 11 rebounds while King also contributed 19 points. Binghamton recorded a higher three-point percentage than UA, ending at 31.8 percent (7-22) while the Zips only made three of their 15 shots from behind the arc. Akron recorded 21 points off of the Bearcats 17 turnovers. Keri McHahan started in her collegiate debut, adding nine points and four assists in the strong Zips outing.

The Zips continued their dominance on Saturday with an 82-49 victory against Northern Kentucky which gave UA the tournament win. After the win, Anita Brown received the Most Valuable Player honors and was named to the All-Tournament Team with Sina King. Both scored in double figures, along with Hannah Plybon and Kerri McMahan. Even though the Zips had 15 turnovers, Northern Kentucky only turned that into five points. Meanwhile, Akron gained 15 points from NKU’s 17 turnovers. UA ended the game with a 45.9 percent field goal percentage, 46 rebounds, and 14 assists. Of the 82 points, 32 came in the paint.

The next game will take place at home on Tuesday, Nov. 18 when Akron faces Northern Iowa at 10:30 a.m. for Zips’ Education Day.

Watch for Brown, this week’s Student-Athlete of the Week to make an impact along with King, Plybon and the freshman sensation Kerri McMahan to continue their dominance against the visiting Panthers.

The Panthers are going into their second game of the season and are 1-0 after winning a nail biter against Tulsa University, 66-69. Look for Madison Weekly to make an impact after a 26 point performance where she also went 5-6 at the three point arc. Also, Jen Keitel, Amber Sorenson, and Stephanie Davison will look to disappoint the Zips on their home court as well and gain their second road victory of the season.