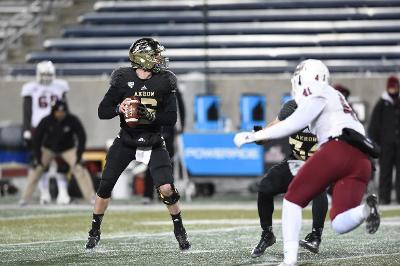 No. 16 Kyle Pohl stepping back to throw the ball.

The University of Akron snapped their four game losing streak with a great preference against the Minutemen of UMass.

The game itself had both teams battling through the wind and the cold but the final whistle revealed the Zips had a dominating victory of 30-6. Akron owes this performance in large part to their defense, who gave up 11 first downs in the game. Six of these first downs came in the second half of the game. The defense also allowed a mere 204 yards on the game and had four turnovers that included a season high of three interceptions in a game. Defensive players who made an impact were Jatavis Brown, with a nine tackle performance that led the Zips in the game. Justin March finished with eight tackles while Johnny Robinson added an interception in addition to his six tackles in the game.

On the offensive side, the Zips showed images of the team who upset the Pittsburgh Panthers in week three. As they gained 411 yards and controlled the clock for almost 35 minutes in the game. Kyle Pohl completed 65 percent of his passes and 277 yards for two touchdowns. On the ground, the one-two punch of Jawon Chisholm and Conor Hundley combined for 134 yards and a touchdown. Senior receiver, Zach D’Orazio had a career high in his final game with 10 receptions and 121 yards.

This game was the final home game of the season and before the first kick-off the 26 seniors were honored with their family for Senior Night.

Next up the Zips will head to Kent State University to challenge the flash in their annual rivalry game for the wagon wheel on Tuesday, Nov. 25.