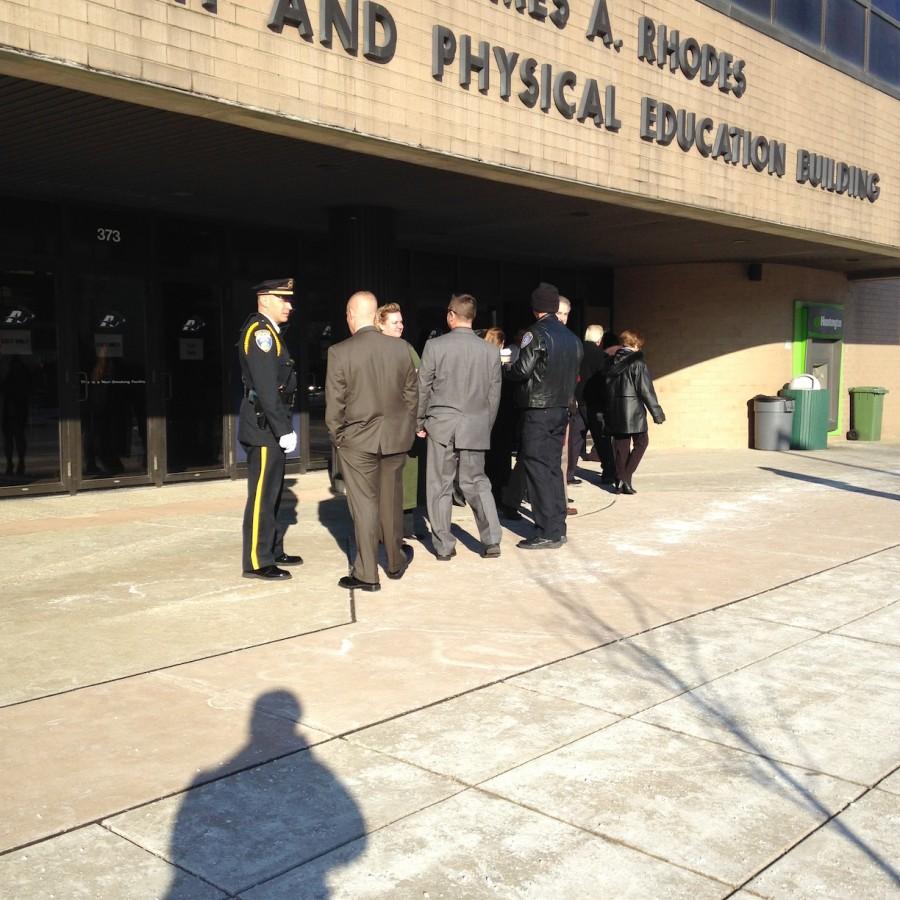 An officer monitors the line to get into the lobby of James A. Rhodes arena.

A viewing for Justin Winebrenner, 7-year City of Akron Police Department veteran and The University of Akron alumni, was held on Friday, Nov. 21, in UA’s James A. Rhodes arena.

More than a week has passed since Akron resident Kenan Ivery allegedly shot Winebrenner while he was off-duty.

The shooting occurred around 2 a.m. on Sunday, Nov. 16 at Papa Don’s Pub, not far from UA main campus. Ivery came to the tavern and was asked to leave before coming back 15 minutes later with a gun. According to the Beacon Journal, it was not clear whether Ivery planned on shooting anyone.

Upon his return, Winebrenner and a few others interrupted Ivery at the door. Five people, including Winebrenner, were shot. He died 30 minutes later at Summa’s Akron City Hospital.

Ivery was arrested in a field near the pub soon after the shooting. He plead not guilty and a court hearing has been set for Wednesday, Dec. 3.

Grave and solemn faces filled the lobby of Rhodes arena. Family, friends and fellow police officers attended, including those from other departments such as Copley, Barberton, Cuyahoga Falls, Beach City and more.

City of Akron Police Chief, James Nice, had nothing but reverence for Winebrenner. He is remembered as sacrificing his life to save others, an act of supreme devotion which reflects his entire character.

“He was just the perfect cop—tough guy, strong guy, but gentle with people and victims…a gentle giant,” said Chief Nice.

Winebrenner’s funeral service was also held in the Rhodes arena on Saturday, Nov. 22. His casket was then escorted through the streets of downtown Akron by police officers, pausing at the police station along the way.

Police Chief Nice has plans for Akron in consequence of this tragedy.

“[Winebrenner’s] father and I are using this as a springboard to try to advance firearm legislation. We want to make the streets safer for everyone,” Nice said.